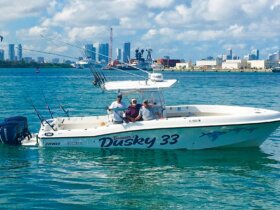 Where’s there’s bait, there are billfish. Ironically some boats, skunked on mahi-mahi or dolphin at the 13th Annual Offshore Marine Dolphin Derby hosted by the Virgin Islands Game Fishing Club on April 27, released blue marlin instead.

“Right fish, wrong tournament,” joked angler and tournament director Jim Jamison, about the marlin he released that would have counted for points in the upcoming July Open Billfish Tournament.

In the end, it was St. Croix-based charter captain Carl Holley, aboard the Triple Secret, who took home the top angler and top boat prizes respectively with the catch of a 38-pound mahi-mahi and 14 total mahi-mahi for the day.

Holley tells his fish tale: “We left Frederiksted at 7:30 a.m., headed north working our way toward St. Thomas. Along the way, we saw birds and then we’d see the schools of fish. We caught five in the first school, three in the second and six in the third.”

It was the third and final school that proved the lucky charm—the biggest dolphin of the tournament.

“I saw him come up behind the boat and threw him a sprat. He went for it,” Holley explains.  Tournament rules allowed for live baiting.

In other awards, Jeff Crokin aboard Gone Ketchin caught the 2nd largest dolphin, a 35-pounder, with Edward Saunders on Irving’s Son 4th with a 33-pounder; David Pearsall on Mrs. Wave 5th with a 32-pounder; John Mills on Volcano 6th with a 32-pounder (tie between 5th and 6th broken by length of fish); Tim Albano on Seabee 7th with a 31-pounder; Trevor Walters on World Class 9th with a 30-pounder; and Paul Ledbetter on Seabee 10th with a 28-pounder.

In total, the tournament fleet caught 54 dolphin for a total weight of 1,197 pounds. Anglers and guests at the awards ceremony enjoyed a portion of the catch Monday night.

The next event hosted by the VIGFC will be the 45th Annual July Open Billfish Tournament, July 15-17, 2008. For information, visit: www.vigfc.com