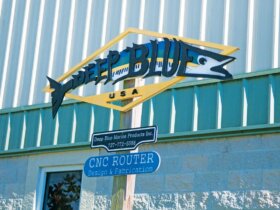 When navigating the New River in Fort Lauderdale, mariners pray one of the 12 daily freight trains is not creeping through town. Once the bascule bridge is lowered to four feet above the river, all marine traffic is completely stopped for 20 minutes until the two mile long train passes. As the train continues north, mariners on the Saint Lucie River in Stuart and Loxahatchee River in Jupiter share the same prayer. In 2016, passenger trains will be added to this rail line more than doubling the time these bridges will be in the down position crippling marine traffic and impacting marine businesses upstream. Concerned citizens are taking action to derail the train.

In 2007 Fortress Investment Group purchased Florida East Coast Industries which owns Florida East Coast Railroad. The railroad operates 351 miles of track between Jacksonville and Miami, keeping freight moving between Florida’s busy ports. One of FECI’s companies is All Aboard Florida, a passenger rail project to provide residents and visitors an alternative to the congested highways and airports between Orlando and Miami. There will be 16 trains per day (32 round trip) with stations in West Palm and Fort Lauderdale.

In 2009, a feasibility study was conducted offering several options to lessen the impact on the affected communities:

• Split the rail traffic utilizing an existing rail line further west along State Road 27 for all freight trains, leaving the proposed passenger line on the tracks over the navigable waterways.

• Build a 65-foot fixed rail bridge over the waterways.

• Build a tunnel for the rail traffic.

All proposals were rejected by AAF/FECI and construction continued.

The passenger trains will add an additional 10 – 15 minutes of closures per hour for each of the three bridges over navigable waters. Adding this closure to the anticipated increase in freight train length over the next year, conservative estimates have each bridge down 40 and 53 minutes per hour. Currently on the New River, recreational vessels, tour boats and tugs towing superyachts negotiate a strong current, wind and at times flooding conditions while waiting for the slow freight train to pass. Double the amount of time waiting and there is a potential for a disaster.

All Aboard Florida reports the rail project will have a $6.4 billion direct impact on Florida’s economy over the next eight years. South Florida has a $9 billion/year marine industry with 75 percent of recreational vessel repair businesses upstream from one of these bridges. The Marine Industries Association of South Florida has led the charge in critiquing the proposed AAF plan, however insists that meeting boater concerns could yield tourism growth for Miami, Fort Lauderdale and West Palm Beach. This is where the common ground ends between the parties. Communities are beginning to take action in an attempt to derail the project.

Delray Beach, Palm Beach Gardens and St. Lucie County have passed resolutions against AAF citing concerns about safety, financing and environmental impact. At a grassroots level founder of Florida Not All Aboard, K.C. Ingram-Traylor began a petition opposing taxpayer funding for AFF. Signatures have already surpassed 56,000.

Indian River County and Martin County have filed a Complaint in the U.S. District Court against the Department of Transportation stating they unlawfully issued $1.75 billion tax-exempt private activity bonds to AAF. The counties contend that DOT incorrectly interpreted a statute meant to fund highways when approving the bonds for the railroad. The lawsuit also contends DOT sidestepped the National Environmental Policy Act by approving the bonds without ensuring the rail project would be compatible with nearby communities.

The U.S. Coast Guard has now become engaged with the concerns on their waters. In May USCG issued a temporary deviation from the operating schedule that governs the Florida East Coast Railway (FEC) Railroad Bridge across the New River. Effective May 18 through October 16, 2015, the deviation requires a bridge tender onsite with a telephone. The telephone number will be posted on both sides of the bridge for mariners to call for the train schedule. Several operators of larger vessels have already begun utilizing this phone number to minimize their wait time at the bridge.

Despite the community outcry, All Aboard Florida continues moving full steam ahead while the marine industry and local communities are asking to put on the brakes until workable solutions can be found to satisfy both parties. This is an ever changing situation. Stay tuned to All at Sea for further updates.

GET INVOLVED:
The following organizations have up-to-the-minute information as well as ways to let your voice be heard.

Florida Not All Aboard
www.floridanotallaboard.net

Save the New River FTL
http://admmls.wix.com/savethenewriverftl