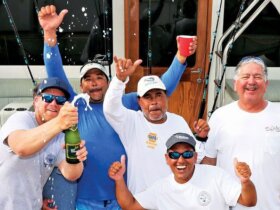 “The
St Lucia International Billfish Tournament will take place on September 28 to
October 2, 2006” said St Lucia Game Fishing Association’s (SLGFA)
vice-president Milton McKenzie “and it will be based in Marigot
Bay!”

That’s
a couple of firsts, primarily that the date is announced almost a year in
advance and that SLGFA decided to leave Rodney Bay Marina, the
tournament’s home for the past 15 years.

“I
can understand the early release of the start date, but why the move?”
All at sea asked.

According
to McKenzie SLGFA already have two docks allocated to the tournament with
negotiations for a third.

Facilities
at Marigot carry on apace what with development of Discovery and the expansion
of JJS and Doolittles, who should benefit considerably by the relocation.

There’s even talk of a shopping mall.

“All
needs for all anglers,” said McKenzie, “we want anglers to stay
around after the event. This year’s good-natured prize giving sent out
the right signals with people staying back even though they had nothing to
collect.”

SLGFA
also expect to have a number of Fish Activating Devices (FADs) in place within
the next few months to encourage fish, similar to anglers, to stay around.

A
Martinique FAD, plus Bernard Johnson of Grey Ghost fame, provided this
year’s heaviest fish a 324lb blue marlin. There was also a record tuna,
caught by Max Chalono of Recovery from Martinique,
at a huge 131lbs it beat the old record by 11lbs.

“Each
FAD will consist of a cluster of four anchored points with a centre point with
a buoy.

“The
FADs aren’t only for sports fishing, we also expect local fishermen to
benefit. We’re hoping for ten FADS in all, sponsored by individuals and
businesses,” said McKenzie.

The
central buoy will be between 20 and 30ft below the surface with GPS
co-ordinates available to members of the association and local co-operatives.

SLGFA organize
monthly competitions and have raised awareness in not only the tournament but
also conservation. Ten fish were caught and released in the 2005 tournament.

“By
2007 we expect 100% catch and release, countries adopting this practice have
witnessed a rise in catches,” said McKenzie.

Marigot Bay Marina reopened as an official Port of Entry for yacht-based visitors. We have stringent quality controls and health and safety measures