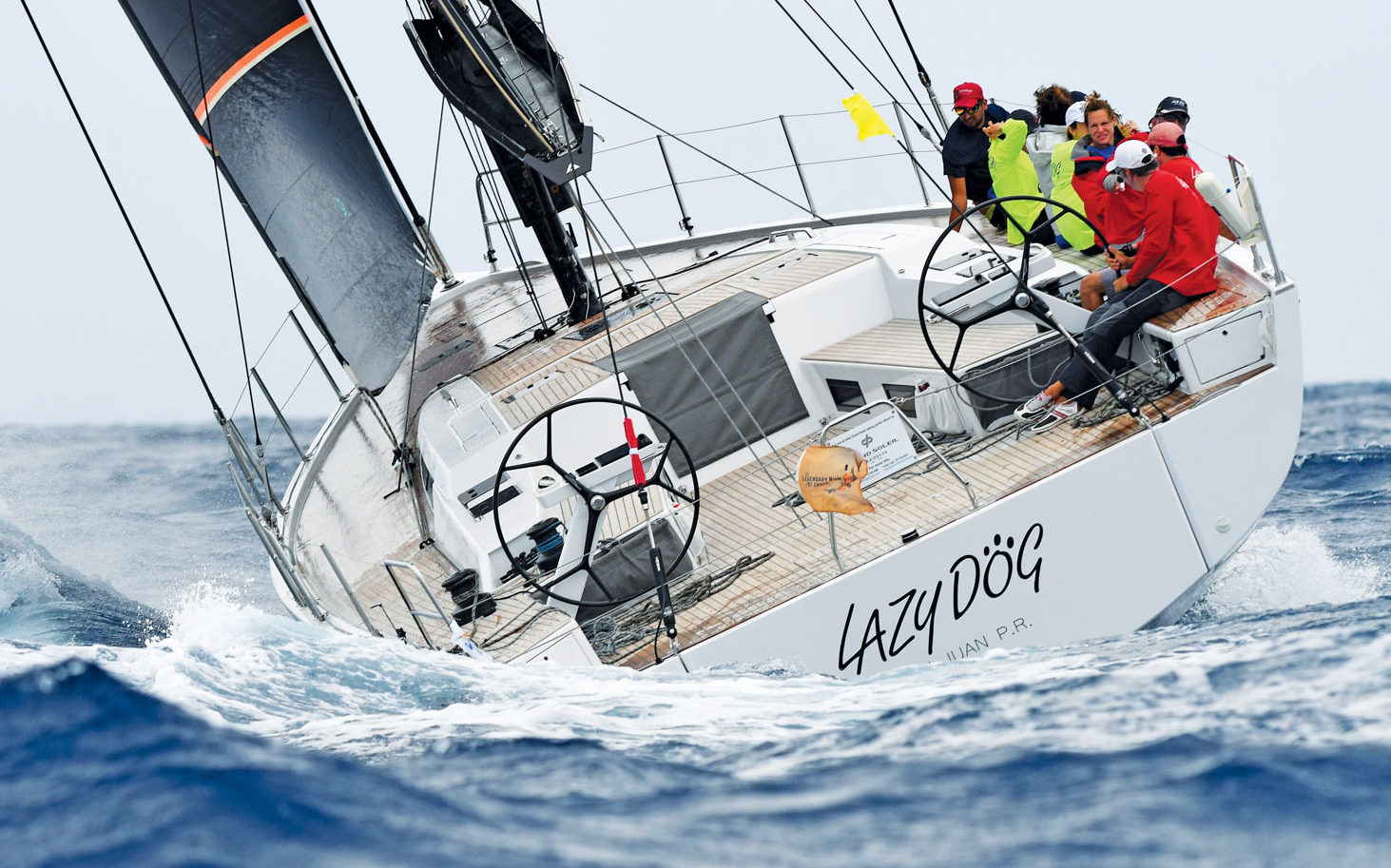 Zippy winds of 15 to 20 knots made for good racing
conditions on Saturday, December 31, 2005, as a flotilla of 30 sailboats
participated in the 11th annual St. Barth’s Regatta, an unofficial parade
around the island open to boats of all sizes. From the two smallest (Soca
and Baladin) at 29’ to
Elenora, a 150’ traditional schooner that was
the largest competitor, the fleet set sail under rainy skies with slightly
rough seas. But the sun was shining for most of the day, and the overall
winner, Leopard of London, a contemporary 97’ Reichel
and Pugh sloop, clocked just 2 hours, 5 minutes, and 39 seconds for the fastest
time of the day (the current record, set in 2004 by the 147’ Baltic
yacht, Visione, stands at 1 hour, 32 minutes, 7
seconds).

One of the nice things about this just-for-fun event is the
wide variety of boats that participate. In Class 3, for the 12 smallest boats,
the winning entries, Soca (29’), Magic Carpet
(a 30’ sloop), and Speedy Nemo (34’),
allow local sailors to compete along side an international group of skippers
and owners who spend the holiday season in St Barth. Other entries in Category
3 include Fritz Bus, a well-known figure in St Barth who sailed over from
Sint Maarten on his 24’ Carib
Melges (taking fourth place in this class) and Donald
Tobias, owner of the wooden W-boats, with a new entry, the 46’
Equus (fifth place).

In Class 2, the winner was Carrera,
a sleek Wally 77 luxury yacht that has dual draft settings, making it possible
to have a 2.50 m (8’2") draft—ideal for entering shallow
waters and getting close to the shore. She can also drop her draft down to 4.05
m (13’1") for stable performance sailing. With a time of 2 hours,
fifteen minutes, 15 seconds, Carrera was just 10
minutes behind the overall winner, Leopard of London. Second place in Class 2
went to the 80’ Herreshoff wooden classic, Ticonderoga,
a boat that spends all winter in Saint Barth. Skipper Tom Reardon was aboard
along with David Ray, of Bannister’s Wharf fame, at the wheel for the
race. Although its actual “time elapsed”
was not the second fastest, Ticonderoga
finished second in its class with the staggered times and handicaps taken into
consideration. Third place in this class went to Blue Muse, a 70’
Hinckley.

Chris Sherlock, the Australian skipper of overall winner,
Leopard of London, confirms that this was the first outing for this
six-year-old yacht in the New Year’s Eve Regatta. “The sailing was
fantastic,” he said, after the awards presentation on the dock following
the race. “In my opinion, this is the best island to sail around.
It’s so beautiful.”
With staggered starts, Leopard of London was the last boat to leave the
starting line at 11:45am. “It was a tough sail at times, as the wind kept
shifting,” Sherlock notes. “But once we put the spi
up, we started passing all the boats except a few, and made up for the time
minute difference.” When Sherlock crossed the finish line at 1:51pm he
had made the fastest tour around the island, adding Leopard of London, with its
141’-tall sloop rig, to the list of past winners, which includes the
147’ Mari-Cha III.

Organized by Mark Del Giudice,
skipper of Trey Fitzgibbons’ 65’ sloop, Mischievous, in
collaboration with the Port of Gustavia and the St
Barth Yacht Club, the New Year’s Eve Regatta puts sailboats in the
spotlight for the day, even though the docks and harbor are filled with some
spectacular motor yachts, including Paul Allen’s Octopus, one of the
world’s largest at over 400’, and Ronald Perelman’s Ultima III, a perennial visitor at the main dock (only
yachts that fit the “Saint Barth Size” of 60’ or smaller can
back up to the docks). A post-race champagne toast on the dock is the perfect start
to the evening’s round of New Year’s Eve festivities, the
high point of the winter
season in Saint Barth.