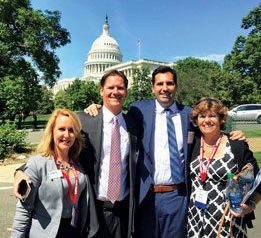 A bill introduced in Congress would make it possible for foreign-flagged boats to be offered to sell to U.S. residents while in U.S. waters. Nine members of the International Yacht Brokers Association (IYBA) traveled to Washington, DC in May to gain support for this bill, HR Bill #2369, which has bipartisan co-sponsorship by Florida representatives Lois Frankel, D-West Palm Beach and Ted Yoho, R-Gainesville.

“It is estimated there are about $2 billion worth of yachts currently afloat that are not allowed into U.S. waters to be sold.  Many of these boats decide to stay offshore in the Caribbean or even stay in The Med, as offshore this is the only place a U.S. citizen can legally view and buy them,” explains Bob Denison, founder and president of Fort Lauderdale, FL-headquartered Denison Yacht Sales and IYBA board member, who made the trip. “This bill would allow the import duty of 1.5 percent to be paid at the time of closing, rather than the time of listing for sale, which seems to make more sense. Could you imagine having to pay doc taxes when you list your house for sale, rather than at closing? Duty being paid when a boat sells also makes sense as it would be definable by the Purchase Price, not a guess by an appraisal.”

A new yacht owner will on average spend up to 13 percent of the value of the boat in the first year on upgrades and refit items, according to research by the Marine Industries Association of South Florida. The IYBA supports having these jobs and work performed in the U.S. rather than going offshore.

“While our IYBA delegation was in Washington, DC, at the American Boating Congress in May, we split into two groups with our lobbyist and met with Congressmen and Senators in 15 separate meetings,” says Staley Weidman, of The Catamaran Company and the chairman of IYBA’s Public Affairs Committee. “In an unofficial meeting at a Boat PAC event we could secure a co-sponsorship for the from Congressman Charlie Crist, former Governor of Florida.”