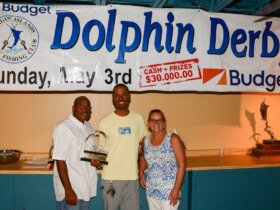 Fishing aboard the 34’ Calypso, Emanuel, with charter Capt. Alvin Turbe at the helm, Laban caught his winning fish off the south coast of St. Thomas near the Lange Bank.

“We were in seaweed all day,” Laban tells. “There were a lot of small fish in the weeds, but we were looking for the big ones.”

“We guessed it was in the high 20’s (pounds). It was great to hear it was 30-pounds at the weigh-in. We were definitely in the right place at the right time to catch it,” says Laban.

Laban’s first place fish was about 25-pounds shy of the over 55-pound criteria to win the tournament’s ultimate prize – $25,000 in cash. He also reeled in the 9th largest dolphin, a 19-pounder.

The second largest dolphin, also a 30-pounder, was caught by St. Thomas’ Jim Jamison, fishing aboard the 34’ Buddy Davis, Overkill, a boat in the Ocean Surfari charter fleet driven by Capt. Kevin Haddox. The tie in weight was broken by length with Jamison’s fish measuring 1.5 centimeters shorter than Laban’s.

“We released a white marlin about 15 minutes after lines in,” explains Jamison. “Right after that we hooked up a double header mahi (dolphin fish). We lost one and it was mine, a big bull, on the line. It shot straight up about 25 feet. I’ve never seen that before. It was a great feeling to get a 30-pounder in the fish box so early.”

The Best Boat award went to Backlash, a 37-foot Calypso in the Ocean Sufari fleet, with the catch of 251-pounds of dolphin. Kayne Santor, Kyle Santor, John Hiebert and Tom Fields were the anglers aboard Backlash.

Several boats donated fish to the host Virgin Islands Game Fishing Club, where this was the featured entrée at the Awards Dinner held May 4.

The Virgin Islands Game Fishing Club’s next event is the Memorial Day Tournament, May 23 to 25, followed by the July Open Kid’s Tournament on July 26th, and the 52nd Annual July Open Billfish Tournament, set for July 28 to 30. For more information, call (340) 775-9144, Email: [email protected] or visit www.vigfc.com