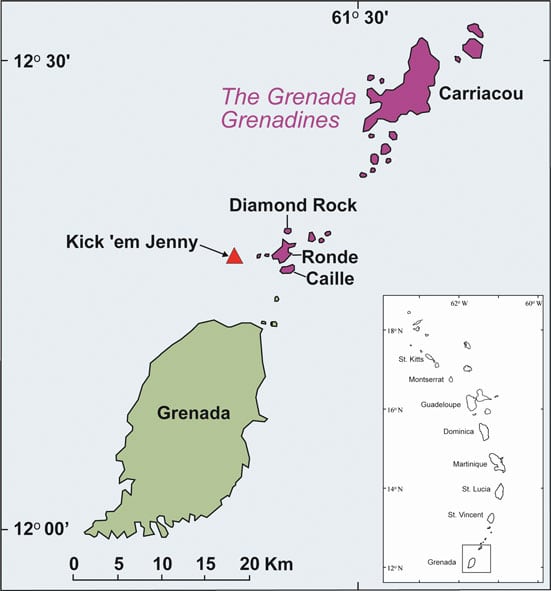 Kick ’em Jenny is a submarine volcano located at 12°18´N, 61°38´W; approximately eight kilometres (five miles) off the north coast of Grenada. As far as scientists are aware it is the only live underwater volcano in the Caribbean. Thought to be just 200m (656ft) below the surface, it is over a kilometre high (0.6 mile), forming a perfect circle at its peak. At each eruption volcanic material is deposited around the summit bringing it closer to the surface. It is a present day example of how volcanic islands are formed. Though the volcano is the most active in the region, erupting at least 14 times since it was discovered in 1939, it is not currently believed to be growing. If it were to erupt continuously, it could rise to the surface, first forming shoals and then a small island. This could happen as quickly as in a year but more likely over a much, much longer period.

Most of us are aware, especially those of us in the southern Caribbean, that Kick ’em Jenny has recently been in the news as it started to show increased signs of activity. On 12 March 2018, the NaDMA (National Disaster Management Agency) of Grenada, with technical support provided by the University of the West Indies Seismic Research Centre in Port of Spain, Trinidad, advised the public that they were raising the alert for Kick ’em Jenny from yellow to orange and advised all marine operators in the vicinity to observe the exclusion zone of five kilometres (3.1 miles).  It has since been reduced to a yellow alert.

What does this mean to boats heading south this season? The Seismic Research Centre monitors the situation and a warning system is in place to advise mariners of Kick ’em Jenny’s status. Because the volcano has been in a state of constant low activity since it was discovered, scientists and the government of Grenada have kept the warning alert level to yellow. Indicating the volcano is restless and that a 1.5km (1 mile) exclusion zone should be observed by all pleasure craft. If activity increases levels would be raised to orange or even red alert. During an eruption the nearby waters could potentially become turbulent with rocks and hot ash being expelled from the sea, posing a danger to boats, however, the quieter periods are of more immediate concern as a submarine volcano can emit significant amounts of gas. These concentrated bubbles effect the density of the water resulting in loss of buoyancy and the possible sinking of vessels.

Montserrat – In the Shadow of the Volcano

Whilst there have been no recorded incidents, according to the UWI-SRC, one of Grenada’s worst maritime tragedies may have resulted from just this phenomenon. On the 5th August 1944, the wooden schooner Island Queen, with over 60 people on board, disappeared between Grenada and St. Vincent. At the time it was thought that a German or allied submarine had torpedoed the boat. These theories, however, cannot easily explain the total lack of debris after the boat’s disappearance. Kick ‘em Jenny had, in fact, erupted the year before (1943) and it is highly likely that it was still actively degassing in 1944, without any signs at the sea surface of such activity.”

With this in mind, as I sail past the area this season I, for one, shall be observing the exclusion zone.

For the latest alerts on Kick ‘em Jenny, visit: http://uwiseismic.com/General.aspx?id=59

Source with permission: The University of the West Indies –
Seismic Research Centre http://uwiseismic.com/General.aspx?id=27

Rosie and her husband Sim Hoggarth have been cruising the Caribbean and North America for the past 14 years. They are currently settled in Grenada on their yacht Wandering Star. www.yachtwanderingstar.com