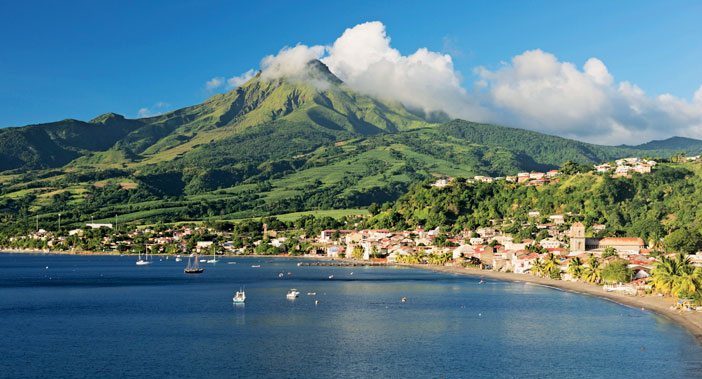 Top Ten Volcanoes in the Caribbean You Can Hike

Approaching Montserrat from the south we see a stark rubble hillside with a high mountain wearing a cap of cloud and there is a faint smell of sulfur from the Soufriere Hills volcano. A stop in Montserrat has been on our list for several years, but you need to time your visit for a period of light easterly trade winds and no north swells to be comfortable in Little Bay.

The people of Montserrat are resilient. In 1989 hurricane Hugo wiped out much of the island’s infrastructure. Over 90% of the houses were damaged.

People rebuilt and resumed their lives. In August 1995 the volcano that had been dormant for four hundred years awoke, and in 1997 lava flows buried three quarters of the island in ash rocks and debris, including Plymouth, the capital city. Just two years ago in February 2010 a dome collapsed sending more ash and rock fall onto the island. This stark landscape and resilient people have a story to tell.

Joe Phillip, our guide, took us to lookouts where we could see the impact of the lava and debris flows. Now, after 15 years you can see where the pyroclastic flows covered a church leaving only a steeple, an entire golf course was buried and all that is left of a three story house is the copula at the top.

Joe had a small album of photos of the landscape before the eruption and helped us compare those to the current situation and the differences were astonishing. It would have been difficult to see the impacts of the volcanic activity without the photos. I enjoyed the visit to the Montserrat Volcano Observatory where we took a tour of the command center housing the computers that display the devices monitoring the seismic activity (vibrations, gas and GPS (looking for shifting of the earth).

We asked Joe about the current economy of the island and he said that there is a small amount of tourism, but exporting sand and gravel is the major source of income these days. In the pre hurricane Hugo days Montserrat was the home of Associated Independent Recording studio where artists such as Paul McCartney, Dire Straits, Stevie Wonder, The Rolling Stones, Jimmy Buffet, Eric Clapton and many other famous artists recorded with the celebrated director, George Martin. The studio closed after Hurricane Hugo, but Sir George remained involved with the island and raised funds to construct the Montserrat Cultural Center. Have you ever wondered about the Jimmy Buffet song Volcano?

The next day we hired Joe to take us to the trailhead for the Oriole walkway trail. The trail was easy to follow and in good shape. Hiking maps can be purchased from the tourism board and the Montserrat trust.

Before the eruption, the 40 square mile island was the home to about 11,000 people; the remaining 5,000 people are trying to resume life and seem to be doing a pretty good job of rebuilding and carrying on.

Devi Sharp is a retired wildlife biologist and is exploring the birds of the Caribbean with her husband, Hunter, aboard their sail