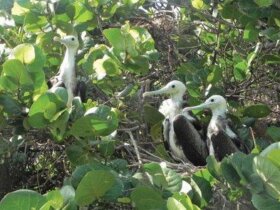 The first time I heard the name “Kemp’s Ridley” many years ago, a friend called from a beach bar in Florida.  “You won’t guess what just crawled up to me while I was working on my tan! It was a Kemp’s Ridley and it came right out of the water and up to my beach chair, and stayed for 10 minutes.”  I had no clue who or what the heck she was talking about.

As we reported in last month’s issue, Kemp’s Ridley, Loggerhead, and Green sea turtles won a temporary reprieve from becoming bycatch of longline fisheries in the Gulf of Mexico when National Marine Fisheries Service (NMFS) in the United States announced in late January that longline fishing will be suspended for a period of six months.  This reprieve and the protection plan that will be developed during the suspension are critical to the sea turtles’ survival.

Kemp’s Ridleys are found mainly in the Gulf of Mexico from the Yucatan to south Florida and up the U.S. eastern seaboard as far as New England.  Although the NMFS estimates that 95% of Kemp’s nesting activity occurs in the state of Tamaulipas, Mexico, limited nesting has been observed along beaches in Texas, Florida, and the Carolinas.

The most fascinating and outstanding characteristic of the Kemp’s Ridley species is the arribada, the annual mass gathering of gravid females on beaches in Mexico where they lay two to three average clutches of 100 eggs each from April through July.  No one can explain what causes the Kemp’s Ridley turtles to gather in arribadas.  Some surmise it is lunar cycles, some hypothesize it is pheromones released by the females and carried in currents throughout the Gulf that signal the arribadas, and still others believe it may be offshore winds that lead the females to the annual arribadas.

One of only two sea turtle species known to nest during arribadas, Kemp’s Ridley arribadas have declined precipitously.  In 1961, upon viewing a Kemp’s Ridley arribada at Rancho Nuevo, Mexico, filmed by an amateur cameraman in 1947, scientists estimated 42,000 nesting females came ashore in massive waves of clambering, scrambling turtles.  The film documented one of the two main causes of Kemp’s Ridley’s listing as critically endangered.  Villagers were shown raiding the turtles’ nests and taking the eggs.  The scientists viewing the film witnessed 80% of the nests destroyed.  With an average clutch of 100 eggs, the number of eggs taken that day may well have reached over three million.

In 1967, 20 years later, only 5,000 Kemp’s Ridley turtles came ashore to lay their eggs.  And, the decline worsened.  Thirty years after the 1947 film, a mere 200 Kemp’s nested in Mexico and that trend continued through the early 90’s; arribadas shrank from 42,000 nesting turtles to a mere 200 over a 30 year span bringing the Kemp’s Ridley sea turtle species to the very brink of collapse.

Preferring muddy, sandy bottoms, Kemp’s Ridley sea turtles rarely go below 160 feet, spending their time in relatively shallow water making them particularly vulnerable to the hazards of dredging, trawl fisheries, and longline fishing.  Although TEDs, turtle exclusion devices, are now required in shrimp trawls and are making a difference in the numbers of turtle deaths, longline fishing in the Gulf of Mexico continued to pose serious risk to the Kemp’s Ridley.

Nest destruction by those collecting turtle eggs, as shown in the 1947 Mexico film, was devastating not only to Kemp’s Ridley but also all other species of sea turtles.  While egg collection still occurs, it is rare and protective regulations have been in place since 1966 making a significant difference in the number of hatchlings emerging from the nests.

At the turn of the 21st century, the Rancho Nuevo arribada saw 2,000 nesting females.  During the 2003 arribada approximately 3,500 Kemp’s Ridleys nested at Rancho Nuevo with smaller nesting sites observed in Texas.  A record 127 nests were located during the 2006 nesting season along Texas beaches.

While the arribadas very slowly continue to increase in populations, it will be a long time, if ever, before we see another arribada with 42,000 nesting females on the beach.

After 30 years as a wild and domestic animal rescuer, rehabber, and educator in the states, Becky Bauer became a scuba instructor and award-winning journalist covering the marine environment in the Caribbean.  She is a contributing photographer to NOAA.