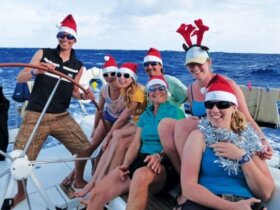 The vote was unanimous! Karl James, a two-time Olympian in the Laser Class who started sailing in Antigua at the age of 12, is the new President of the Antigua and Barbuda Sailing Association (ABSA). James was elected at the group’s General Meeting in January. He assumes the role from Geoffrey Pidduck, founder of the organization 30-plus years ago, who leaves behind big shoes to fill. James is certainly equal to the task having recently been awarded an MBE by Great Britain’s Queen Elizabeth II for his contribution over 35 years to yachting in Antigua & Barbuda.

“I am focusing on carrying his (Pidduck) work forward for the benefit of the sport of sailing in Antigua,” says James, about his new role as ABSA President. “I intend to bring to the ABSA my experience as an Olympic athlete, professional superyacht crew, sailing coach, regatta committee member and manager of Sailing Youth Development programs. I give myself the same advice that I give to my junior sailors: ‘Be willing to learn, create goals, keep options open and talk to people in the industry. We are all ambassadors for Antigua. Give back and help others to grow in our community.’ To succeed, work is inevitable, but if you do what you love, it won’t seem so hard.”

Pidduck has been nominated by ABSA for Sportsman of the Year for his contribution to the sport of sailing and its development in Antigua & Barbuda.

There’s a new U.S. office in the Chesapeake Bay. Ing Kiland will head up this latest location as an associate broker.