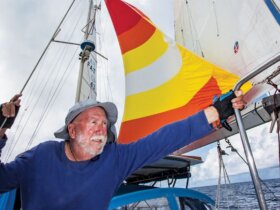 Long ago and far away, Commander Vernon Nicholson R.N. Ret. had what amounted to a brilliant idea.  After  having arrived in Antigua with his wife Emy, having sailed across the Atlantic in their 1903 70ft schooner Mollihawk, he began the charter trade in the southern islands by taking mainly American guests on a voyage of adventure through the seldom visited islands of the Leewards and Windwards.

He was a truly delightful man in every respect. It can be said that he was completely responsible for starting a new business in the Caribbean. With him came his eldest son Desmond and his youngest son Rodney. Soon, after their arrival the Commander and his wife moved into the antiquated buildings of the old British Naval Dockyard in English Harbour and slowly began the painstaking task of forming his new business. It was named Nicholson Yacht Charters.

Probably one of the first tasks the Commander completed was to go back to the Mediterranean where a handful of ex British war time officers were running their elderly yachts on charter.  “Now, old boy, you’ll love it out in the Caribbean. The sailing is superb and the passages no more than 20 miles or so, the rum is cheap and the island crews are first class.”

And so a fleet of mainly what would now be called classics arrived in English Harbour to help forge the new business. The Colonels, Captains and Wing Commanders became the new charter skippers. The wives and daughters became the cooks and so began an entirely new business that has now grown to the absolute nautical monster it has become.

Thanks to the enthusiasm of the new Caribbean crew the yachts began to shine and even really old vessels looked like new ones. When I arrived in 1957 there were probably about 20 boats in the Nicholson fleet, but each year the number of vessels was growing fast. I’ll never forget, after a bone-wrenching drive across the island, the sheer beauty of Nelson’s old Naval Dockyard standing proud in the moonlight. Absolutely mind-boggling.

The Nicholson Family, however cheerful they might have appeared, ran a tight ship, and it can be said now in retrospect that their efforts in those long past years were more than appreciated by everyone who saw what was happening. Anyway, some sort of advertising was needed and it was not long before the Commander had another brilliant idea. Why not encourage the agents and brokers from the charter companies in the USA to fly into Antigua to see the charter yachts for themselves? Have a hands-on experience and actually sail for a bit! Even spend a night or two at anchor under the lee of some little island where small waves lapped the white sand and the protecting reef sang a deep water lullaby out to windward.

The guests (charter agents) loved it. Their cocktails tasted better than ever before and through the open galley hatches their ship’s cook was producing a wondrous dinner from which came tantalizing smells on the night time breeze. The moon and stars would still be there when they returned to sip their after dinner drinks before returning to their cabins for the night. In reality, it was not such a bad idea was it?

Then of course for breakfast the following day there was Uncle Rodney Nicholson in a voluminous chef’s hat creating magic on the beach which he did again in the evening, producing fresh lobster and other exotic and magical Caribbean delights. Even us skippers of the yachts enjoyed it and wiggled our toes in the still warm sand. Of course there might be breakfast on deck, followed by a trip out to the reef in the dinghy where the agents and brokers were attired in snorkels to view the denizens of the deep. This of course would give everyone something to talk about that evening.

There may well have been another beach barbeque and by the light of the flambeaus, the day was brought to an end as the agents returned to their yachts. Then just to show our guests that the yachts could sail, there was a cruise in company down wind back to English Harbour…..to arrive in time for cocktails on a big yacht like Freelance, and after that a steel band on the beach in Freemans Bay.

To say that we all had about a 24-week season would not be far wrong! The great thing was that every one of us sailing types had a blast. The sail back to English Harbour was over in little more than one hour so it didn’t matter too much if it was quite rough. The brokers and agents of those faraway days all became good friends of the skippers and crews, and to this day we visit them in the States if and when time allows. I just can’t help wondering if the modern day charter show should be a little more like the good old days.