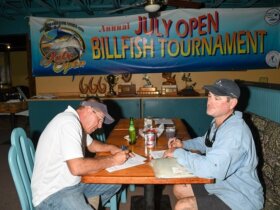 St. Thomas, U.S. Virgin Islands. There’s a reason the sport is called ‘fishing’ and not ‘catching’. The team of anglers and crew aboard the 68’ Paul Mann, Jichi, found this out the hard way. After releasing a near tournament record 7 blue marlin on the first day, they went fishless on the second day of the USVI Open Atlantic Blue Marlin Tournament (ABMT). Even so, none of the 22-boat fleet surpassed Jichi’s total after two days of fishing, so the Miami, Florida-based team remains in the lead.

The luck was better aboard Carlos Ramirez’ 56’ Viking, Reel Affair. The San Juan, Puerto Rico-based team released two blues, which when combined with the four blues released Day 1, put them at six total and in a solid second place.

The real story of the day belongs to the team on Wave Paver. The Port Canaveral, Florida-based anglers and crew aboard Jr. Davis’ 61-foot Garlington jumped from 12th to 3rd on the Best Boat leaderboard and scored high boat for Day 2 by being the first to release three blue marlin.

“We headed up to Anegada and I released our first blue marlin on a pitch bait within the first hour after lines in,” says Davis, whose Wave Paver team won the 2013 ABMT as well as the 2014 Bahamas Billfish Championship. “My son, Steve Davis, caught our second blue also on pitch baits. But the best came just after 2 pm when both my son and I hooked up a double-header.”

The senior Davis was attempting to hook his marlin off a pitch bait when his son snagged a second blue marlin off the long rigger. Davis was still trying to bait his marlin when it circled around, took a bite at the fish-attracting daisy chain of lures and got hooked in the process. Both father and son then stood side-by-side in the cockpit fighting their double-header for a good 10 to 15 minutes. The younger Davis released his fish, leaving his father to make it a pair.

“When I went to catch mine, the fish had totally spooled the reel. We backed the boat down and were about 100 feet from my fish. It was then that I saw the chain wrapped around the fish. I thought it had fallen off during the hook-up. The chain created such a drag that it ended up breaking the line. Even though I lost the fish, it was incredible to be fighting a fish with my son at the same time. It’s an experience that makes me feel like I’ve already won.”

A total of 20 blue marlin were released Day 2 or 45 total so far for the tournament.

The angling action continues Saturday and concludes Monday, when teams set their sights on catching and releasing the most blue marlin first.

The public can catch the spirit of the sport by walking the docks and watching the big rigs come in around 6:30 pm. The number of flags flying off a boat’s outriggers indicate the number of marlin released that day. The more flags, the more marlin the boat released, and the winner is the one who releases the most blue marlin first. Anglers in this conservation-oriented tournament have not killed a blue marlin since 1986. Commemorative tournament T-shirts, hats and more with original art designed by famous marine artist Carey Chen will be on sale each night of the event.

On Saturday, the public is invited to the Red Hook ‘Jump Up’ at American Yacht Harbor marina as part of MarlinFest. First, there’s the Arts & Crafts and West Indian Food Fair from 11 am to 8 pm. Then, the Chowder Challenge of the restaurants happens from 4 pm to 8 pm. The evening caps off with a Caribbean-style ‘Jump Up’ show starting at 8:30 pm.

The ABMT anglers take a Lay-Day on Sunday. But the competition continues on land at the MarlinFest ‘Boy Scout’ Golf Tournament at Mahogany Run. Designed by world-renowned architects George and Tom Fazio, the 6000 yard, Par 70 Mahogany Run Golf Course attracts thousands of visitors each year including celebrities and Presidents alike.

Started by Chuck Senf back in 1972, the ABMT has evolved into one of the most competitive saltwater sports fishing events in the world. The ABMT is fished under International Game Fishing Association (IGFA) rules, and is overseen by a professional ‘Board of Captains’ and well-qualified observers. The tournament benefits the U.S. Virgin Islands Field Service Area, part of the National Capital Area Council of the Boy Scouts of America (BSA) and it helps to fund the Marine Vocational Program (MVP), which is operated and funded under the BSA by the organizers of the ABMT. The MVP program teaches local scouts to swim, scuba dive, sail and more in an effort to interest them to pursue a career in the marine industry.