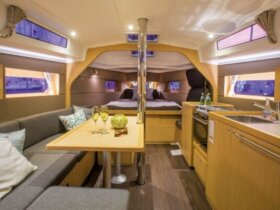 Spotlight on the Oceanis 38

The 39th edition of the Bonaire Regatta officially opened on Sunday night October 8, with music, dance and speeches by the local dignitaries in the heart of Kralendijk, Bonaire’s lovely capital. The international regatta is one of the oldest annual sailing events in the Caribbean, characterized by the slogan: “everything that has a sail can participate” and multiple returning participants, like the Venezuelan captain of the Volare, Thomas Pollehne. This edition of the Regatta was dedicated to Pollehne, who raced in Bonaire for the first time in 1981 and kept returning year after year. His persistent drive was awarded this time as Volare finished the 2006 overall winner.

As in every  year, there were sailing races every day; all sailing classes except the Fishing boats and Micro boats raced Monday through Friday with a lay day on Wednesday. All races for yachts, sunfishes, Opti’s, Splashes, windsurfers, fishing boats and micro boats took place in Kralendijk Bay, at the capital’s sea front.

Regatta Week in Bonaire is more than just sailing races during the day. Every night from Sunday through Saturday there is a Regatta Festival centered at a stage in the Wilhelmina Park where bands from Bonaire and other Caribbean islands headline the nightly events including jazz groups, Reggae bands, local musicians, as well as brass and steel ensembles. Around the stage, local merchants and restaurants build a fair, attracting almost the whole population of the small island and many visitors and tourists.

Monday morning at 7:30, the Regatta’s starting shot was sounded for the Round Bonaire Race and the Lac Bay Race, two long distance races for yachts. After a long day with excellent winds, Volare crossed the line first, making a good start on her way to victory.  She did this in 7 hours and 17 minutes, two minutes more than the 2001 record, which stands at 7 hours and 15 minutes.

Competitor “Team Ibis” with Karel van Haren at the helm and John Getrouw senior navigating considered Volare as the “Boat to beat”. They only succeeded in beating her on the last racing day when winds slowed down to 6 knots only. John Getrouw’s 17 year old son, Johnny, captained the Merlin, competing in the Racing II class, trying to rival his father for the first time. It seems only yesterday that Johnny started his regatta career in an Optimist, but the physical condition of John senior after the races makes us face reality: all of us are getting older but the regatta stays the same.

As always, the Bonaire Regatta is being organized and managed from the seaside Kas di Regatta (Regatta House) in the heart of Kralendijk.

Organizers Elvis Martinus and Byron Tromp are inviting everyone for the 40th edition of this great sailing event in the first week of October 2007. It promises to be fabulous!