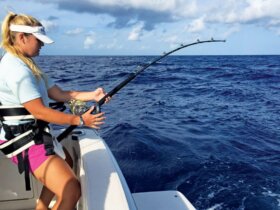 Just moments after Evangelista Torricelli invented the barometer in 1643, some poetic graffiti artist (Bobby Fitzroy, actually) wrote the words STORMY, VERY DRY, FAIR, CHANGE, and RAIN on its face—and doomed the instrument to the quasi-mystical category forever. Well, up until now. Let’s take a fresh, Fatty-ized, look at this common weather instrument—and we’ll start off that examination by identifying what it does not do.

First off—ignore those stupid words Bobby the Brit wrote. They mean nothing. They are only there to confuse you and give pathetic, money-grubbing inkslingers like myself something to write about.

The barometer is a measuring device. It measures atmospheric pressure.

What is atmospheric pressure?

Good question! It is the weight of Earth’s atmosphere, commonly referred to as air.

The beauty of the barometer is that it does this very accurately, very dependably, in real-time. Or, to put it in even plainer language, the barometer predicts nothing. It merely reads what is. A baro is truly in the ‘Now’. If however, it records those readings, it is called a barograph, regardless if it is analog or digital.

In isolation, the barometer is relatively useless.

However, in conjunction with other weather data, the baro ceases to be relatively useless and becomes relatively useful—in relation to that additional data.

That is what my barometer is aboard our ketch-rigged Wauqueiz 43 Ganesh—a stopwatch of approaching and departing weather systems.

Even better, it tells me if the lows and highs passing over my vessel are approaching me, partying with me, or leaving me.

Most modern yachtsmen with SSB/Pactor aboard have tons of offshore weather data. We’re drowning in it. The problem isn’t gathering more information, it is making sense of the data we already have. 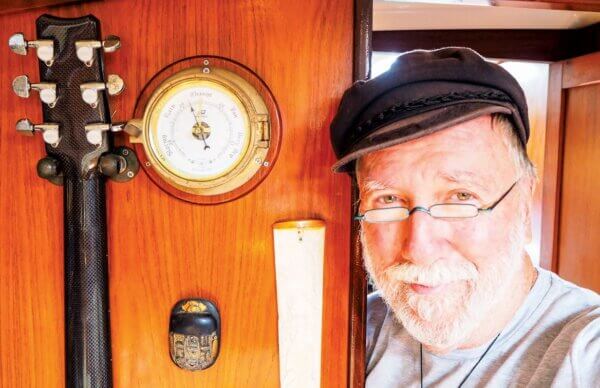 This is what a barometer does—on a second-by-second basis.

“Wait one moment, sir,” shouts a student from the back of the class, “isn’t this NOAA’s job—to predict the weather?”

However, it is lousy at predicting the timing of them or their paths.

When the cue ball strikes another ball—the path of the struck ball is utterly predictable in isolation (pattern) but almost impossible to predict in the presence of other moving balls (chaos).

This is why no two pool table ‘breaks’ are the same—and no two high or low pressure systems either.

Weather is ‘pattern and chaos’ and the chaos part wreaks havoc on NOAA’s timetables.

Luckily, we yachties-snotties have the answer—a cheap on-site barometer suddenly makes all the NOAA weather charts and the related GRIB files understandable. 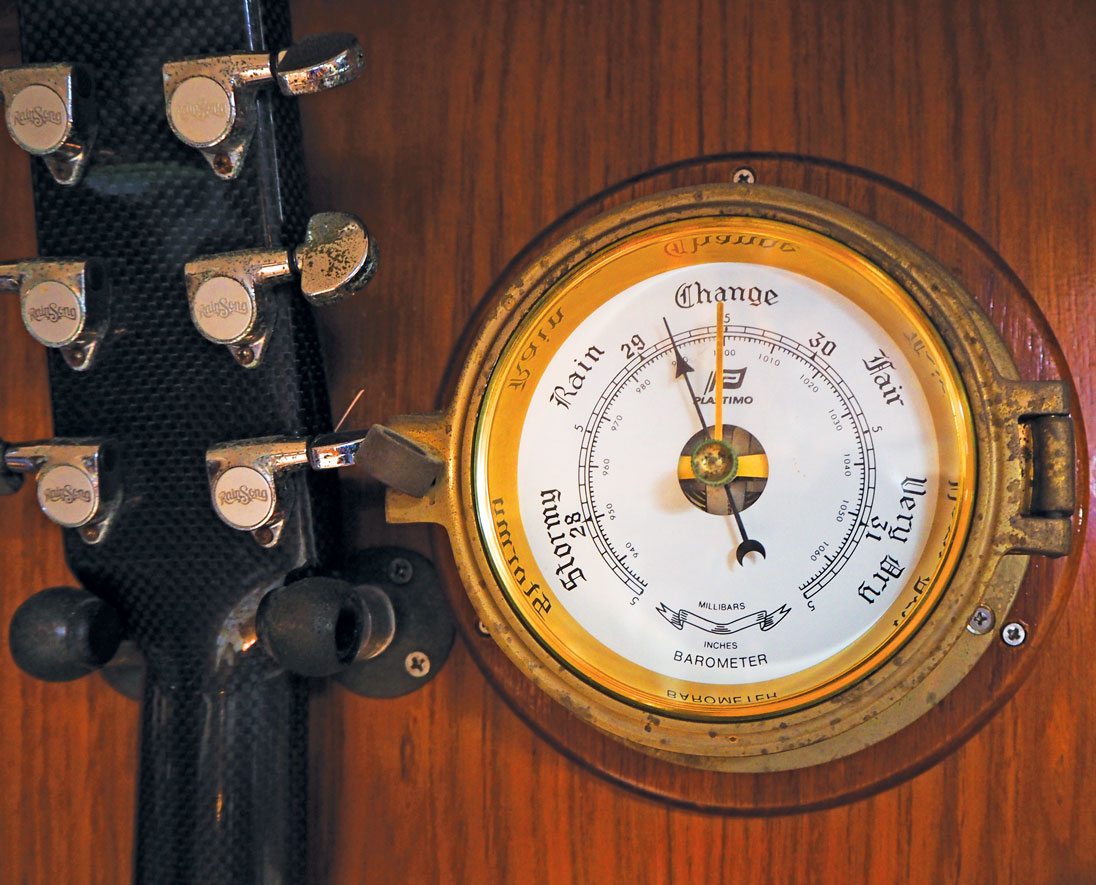 Our slow-moving boat is floating in a thick, viscous ocean but the faster moving weather systems are bumping into each other in thin air—and, hence, they interact amazingly fast.

Let’s say our baro starts dropping, bottoms out at 988 at midnight, and heads back up. This exactly ‘stopwatches’ this large, anti-clockwise (northern hemisphere) low-pressure system for us.

Cool, eh? Because of the barometer, we know if the wind is going to get stronger (approaching) or weaker (departing). This is useful info by any measure.

Again, extremely useful ‘real world’ weather data that can (and does) save lives.

The key to understanding all this is ‘tapping the glass’ to see if the ‘glass is falling’ as we old salts say—or, even worse “Damn! Did you hear that sound? That was our barometer falling into the bilge so far it needs a snorkel and a PADI certificate …”

If we could download a weather map of the approaching storm, we’d notice the lines (isobars) are pretty close together. This indicates severe, rapid change—or, in layman’s terms, high winds.

Let’s say, in addition, there is a large, established, high pressure system just north of us.

As the dangerous semi-circle of our anti-clockwise low bumps into the clockwise rotating high pressure to our north, these isobars will compress and speed up creating the dreaded squash zone. 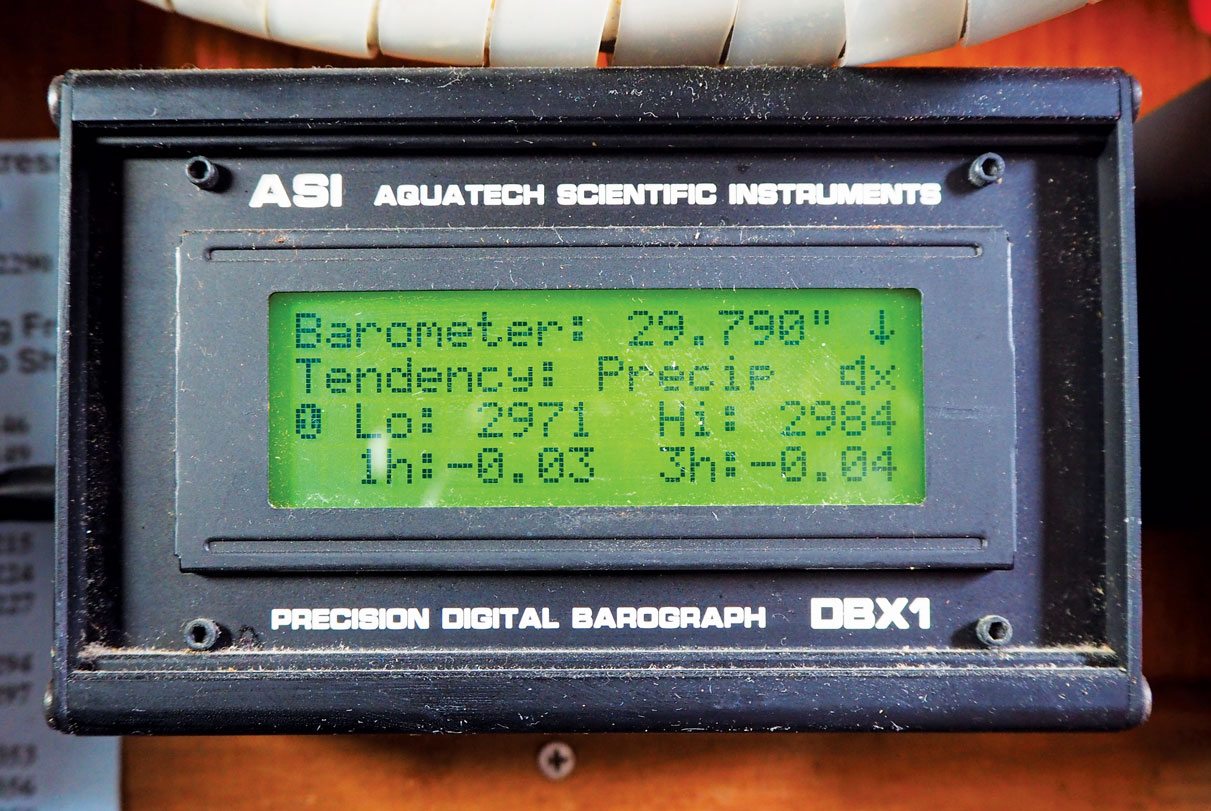 Modern barometers are cheap and small. I carry one on my wrist within my Casio Marine Pathfinder watch. Even better, for a bit more money and size, they can be more accurate as well. Onboard Ganesh I use a digital barograph manufactured by ASI Aquatech Scientific Instruments (DBX1) that is so sensitive it alerts me by (adjustable) audio alarm as mini-squalls approach.

The very best thing about a barometer is that it allows me, in the middle of a massive gale, to tell my wife Carolyn, “Hey, Babe! The glass is rising. The worst of it is over.”

It is amazing the psychological effect this can have on a crewmember.