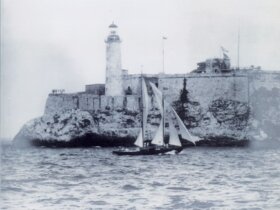 In addition to the ABC islands, the Netherlands were well represented, as well as Colombia and Venezuela. There were also some participants from Hungary, Austria, the United States and Argentina.

The competitions were held in two locations, Fishermen’s Huts at the western end of the high-rise hotels and at Boca Grandi in the east. The Mill Resort housed a number of participants in beautiful suites, with a great swimming pool and a grand view of the recently-finished Riu Resort, which also formed a remarkable backdrop for the competitions.

Since its early years in the mid-eighties, the Aruba Hi-Winds changed from a competition for professionals to an amateur event.  But it still has retained its name as one of the biggest windsurfing events in the Caribbean and includes freestyle windsurfing and kite boarding.

The action on the water kicked off on Thursday with slalom races for 91 windsurfers. On Friday an almost identical program was sailed. While the windsurfers performed their slalom heats at the Fisherman’s Huts, around 20 kite surfers gathered at Boca Grandi both Thursday and Friday for a freestyle competition. Unfortunately the wind remained for most of the time under 12 knots, allowing just one round of heats.

At the Huts there was more wind, with gusts up to 25 knots, good enough for two slalom races on Thursday and four on Friday. The youngsters under 14 in the New Kids, Superkids and Big Kids classes added another four races to it on Thursday.

On Saturday and Sunday all activities brought a crowd to the beach of Fishermen’s Huts. In the morning both wind- and kitesurfers sailed long distance races. In the afternoon all present could enjoy spectacular freestyle windsurfing and a breathtaking kitesurf show which was continued after sunset. This so-called “night kiting” was a real spectacle and a novelty at the Hi Winds.

On Monday the event was concluded by the last exciting slalom races and the awards ceremony at the new mall Paseo Herencia, an ideal venue with its beautiful ponds and the exuberant flaming torches flanking a large screen, on which  photos and a video footage of the event was shown.

During the ceremony, traditionally presented by MC Evert Bongers, the letters of the names of the winners frolicked on the screen. The top freestylers in the kids category was a total Aruban affair: Amanda Westera and Nik van den Eerenbeemt stood together with Kid-of-the-Huts Wesley Connor on the podium. The title Prince-of-the-Huts went to Victor Wederfoort from Curacao.  Douglas “Cheo" Diaz from Venezuela conquered the King title with only a minimal difference in points with the well known Aruban freestyler Quincy Offringa.

There were more top honours for the Aruban windsurfers: Tom Croes was first at the New Kids overall, Nik van den Eerenbeemt conquered the Superkids category and Quincy Connor was the best of the Big Kids. In the Superkids category all the highest places again were the privilege of Aruban youth: Matthias Verploegen and Mack van den Eerenbeemt flanked proud winner Nik.  Amanda Westera saw her name appear as third of the New Kids and Nicole van der Velde was second in the Big Kids.

In the kite competitions the Arubans also scored well: Zeus Lambrano was the best long distance kiter in the sports category. He was followed by Martin and Jonathan. Katja Odijk was the best Aruban lady. She got third in her category. Hendrik Burgers was the winner of the kite women/sports category and Zeus Zambrano got third.  Finally Maki Wiggins and Philip Kervel were second and third in the men’s kite.

The organization, with the active participation of trainee Willem de Vries of the Academy of Physical Education (ALO) in Groningen, The Netherlands, can look back on a particularly successful sailing event. Thanks to the many sponsors the best prizes ever could be awarded, among them cash prizes for a total of US$ 4400.

Els Kroon is a Dutch former teacher who now lives and works as an award-winning free-lance photojournalist on Curaçao.