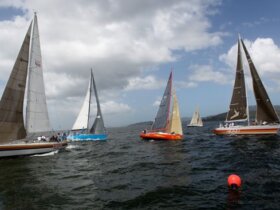 The hallmark of this event held 27 to 30 December 2006 in Chaguaramas on Trinidad, was the strong determination of the competitors. Hailing from Barbados, St Lucia, Grenada, Martinique, UK, South Africa, the USA and Trinidad and Tobago, they did not give up, no matter what the conditions.

When, on day one, the wind failed to materialize, organizers and competitors milled about for hours on a glassy millpond, waiting for the breeze and wondering what sort of sailing would be achieved. They did not know that before the week was out, they would experience wind from all directions with speeds varying from 0 to 25 knots and gusting higher during one of the squalls.

For the well-polished team from Martinique, more accustomed to flat water, it was a different experience to compete in the rough waves, which rolled in later that afternoon, but they rose to the challenge, to take five of the six top places overall in the Optimist Class. For the beginner Opti sailors from Vessigny, where the wind and seas are usually steadier, the conditions in the Gulf tested both their patience and courage, but they persevered placing an extremely creditable 2nd and 3rd in the under 12 group. For the TTYSS sailors, accustomed as they are to the location, it was a chance to show their local knowledge and skills, but not without some very real competition.

Within the participating classes, 26 Optimists, 14 Lasers (Radial and Standard), one MR15 and 6 SR-Max’s, there was a place for sailors of all ages. The two young female competitors Kelly Arrindell (best female Opti sailor) and Abigail Affoo looked tiny as they peered over the gunnels of their boats. T & T’s Opti sailor, Nicholas Knox, grandson of one of the founders of the sport of sailing in Trinidad, fought hard to catch the “flying French”, but ultimately took 2nd place conceding 1st place to fast Martiniquan Anthony Raphael. He was followed by four more French sailors – Steven Gomas 3rd, Remi Retho 4th, Guillaume Abdas 5th and Emmanuel Descas, who was 6th overall, but 1st in the under 12 group.  2nd and 3rd in the under 12 group were Russel Franklin and Patrick Francois, both from Vessigny, T&T.

This is the first time in four years this annual regatta has had a substantial Laser Class and it was in this highly competitive international design that the fit and agile teenagers were able to show their talent, literally skating across the water at times and rapidly flipping their boats upright when they turned over in the heavier wind. In the Radial Laser Class, 1st position went to Andrew Lewis, with brothers James and Stuart Leighton 2nd and 3rd respectively, all from T & T.  In the Standard Laser Class, Phillip de Gannes of T & T led to take 1st place, followed by Chard Banfield 2nd and Nick Goodchild 3rd, both of Grenada.

The bigger SR-Max’s provided five crews of three and one crew of four ranging from teenagers to 50 year olds, with some exciting downwind spinnaker handling, hard upwind tacking and tactical sailing. Ultimate winner in this class was Paul Amon, one of the Caribbean’s top keelboat racing skippers. He was ably supported by a nimble crew of three girl sailors, which included his two daughters, and when receiving his award, claimed that this was the best sailing event he had yet experienced. 2nd place went to the energetic young team led by English coach Ben Todd and 3rd place to the experienced and consistent Peter Bailey, who led on day one and while scoring equal points to Ben, took 3rd place on application of the tie break rule.

Credit for this successful event must go to Guardian Holdings Group, sponsors of this event for the past two years, to the shrewd decisions of Race Officer Mike Rostant, to the dedicated support boat crews, who moved the marks quickly to make the most of the tricky weather conditions and to the commitment of the 58 participants who were prepared to spend up to eight hours a day on the water and still smile about it.