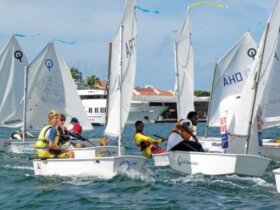 The 5th Guardian Holdings Group Southern Caribbean Regatta, hosted by the Trinidad and Tobago Sailing Association, was held December 27 through 30.  On the final day of the regatta, the sailors had to sail all the way past five islands in order to get some wind, but luckily it came in strong towards the end of the morning and the race committee was able to have all classes sail two races, meaning that all sailors got one discard out of nine races.

As a result, Nicholas Knox (TTSA) was able to drop his 11th place from races three, in which he was unfortunate enough to capsize and, with a 2nd and 3rd place in the final races, he managed to beat his club mate Wesley Scott (TTSA) in order to take home first place in the Optimist Overall.

In the Optimist under 12, Derek Poon Tip (TTSA) and Russell Franklin (Vessigny) held their positions with 3rd place going to Kelly-Ann Arrindell (TTSA) who managed to fight both Abigail Affoo and Myles Kaufmann out of this position with a 4th and 8th place in the final two races of the regatta.

In the Laser 4.7 and Laser Standard, the results stayed more or less the same as the day before, but in the Laser Radial the Leightons once again had to give up first place to Andrew Lewis, who with a 1st and 2nd on the last day of races went home with the first prize in that category, leaving brothers Stuart and James Leighton with respectively 2nd and 3rd place.

The biggest surprise of the regatta this year was, however, in the SR-Max classes where former champion Paul Amon, finally got dethroned by Peter Baillie and his crew, after winning this classes three years in a row.