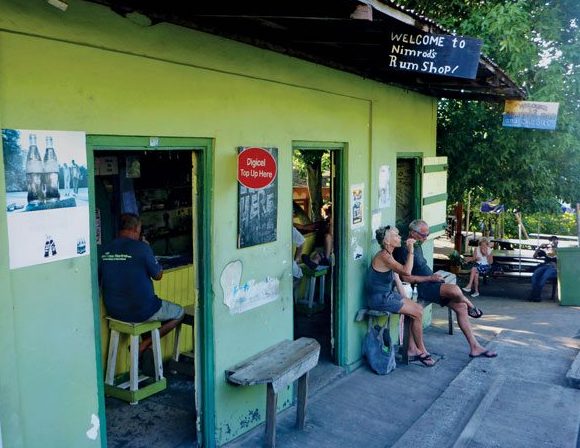 Top ‘Must Try’ Bars of Grenada

The Grenada Yacht Club decided to hold its Sixth Annual
Summer Regatta despite Hurricane Ivan and it proved to be one of the best
events ever! The regatta was held on July 7th through the 10th.

“We had made
repairs to our docks and still had some refurbishing to do for the club after
Hurricane Ivan,” said Club Manager Marilyn Steel-McKenzie, “but it was decided
that we would still hold the regatta.”

Even the weather
offered variety; from racing conditions that ranged from “calm enough to do
some fishing” to five to seven foot high seas that resulted in a broken mast
for one boat! The three days of racing were exciting and offered different
challenges for the various racing classes; Race, Cruiser and Fun. “The conditions
tested all aspects of sailing abilities,” reported race officer James Benoit.
“Saturday had high winds and seas with low visibility at the start of the race.
But overall we had no complaints everyone seemed to really enjoy the racing.”

In the Racing
Class, there were three J24s up against the modified Hobie 33 owned by Richard
Szyjan of Turbulence Sails. Szyjan’s boat, renamed after Hurricane Ivan to
Category Five, is a very fast boat. The
J24 skippers, knowing they were outranked by Category Five, competed amongst themselves, as the faster boat won
the daily races and took the overall for the class.

Winner of the
“Leave Your Boat and Bring Your Mate” Raffle, the visiting Antigua team
skippered by Tom Patterson won the overall points award in Cruiser Class. They
sailed Horizon Yacht Charter’s Beneteau 40.7 Elandra. Geoffrey Pidduck, international race jurist and member on
the Antigua team, said that they had a great time of sailing and socializing,
concluding with “we will be back!”

Also in the
Cruising Class was Aquarela, dubbed
the international boat; owners from Scotland, built in America, skippered by a
Venezuelan and home-ported in Trinidad. Aquarela
placed fourth the first and second races, but on day two in the fourth race of
the regatta during the period of high seas and strong winds, she suffered a
broken mast and had to drop out of the competitions.

Copihue II placed first in the Total
Points award for the Fun Class after competing boat Seaduction was unable to finish one race due to lack of wind.
Seaduction owners, Val and Andre Havenga
won a special “booby” prize for being the race crew that were able to catch
some fish during a race event!

“We had some
really first rate sponsors this year,” said Wanda Brown, Marketing and Promotions
person for the regatta, “even though many were themselves hit hard by Ivan,
they really rallied offering goods and services as prize items and provided us
with great support.” Race day sponsors included Zublin Grenada Limited,
Westerhall Estate Limited and Grenada Breweries Carib Beer.

One participant
from Carriacou commented that in 25 years of racing in regattas, “these were
some of the best prizes I’ve ever seen at one of these events and the skipper’s
packet was just the best!”

Commodore Darryl
Brathwaite said, “I am particularly happy that this year we introduced some
successful “firsts”; a quantum leap in the marketing to upgrade the regatta to
an international event, initiating the partnership with Virgin to include the
public and create a national spectacle, and introducing the boat raffle that
enables “boatless” sailors to participate.

If you would
like more information on race results, photos and sponsors, you can visit the
website at: www.grenadayachtclub.com