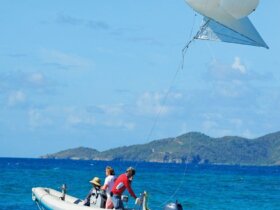 The Rise of the Drones: A New Perspective

In addition to this species’ decline from bycatch in commercial fisheries, the Green sea turtles have long been food for indigenous peoples and meat in the soup pots of gourmands demanding exotic foods.  And as with Hawksbill turtles, when their shells are polished, beautiful patterns are revealed leaving both species prey to souvenir suppliers. The shells become lampshades, ashtrays, jewelry, and ornaments.

Weighing as much as 500 pounds, the Green sea turtle has a rather smallish head making the turtle’s body appear disproportionate. These turtles can stay underwater up to two hours because they use oxygen so efficiently and can store carbon dioxide until they reach the surface.

Although little is known about the reproductive cycles of any sea turtle species, it seems that the female Green sea turtle does not reach reproductive maturity until she is between the ages of 10 and 50, averaging 25 years. To date no one has defined the reason for such a wide range; however, it may prove to be yet another amazing adaption. The age at which they reproduce may depend upon optimal environmental conditions that maximize hatchling survival.

GTFP is a debilitating, disfiguring, and often-fatal viral disease that manifests as soft-tissue tumors that begin as small spots appearing salt and pepper-like. Within a year the spots become multiple tumors, some as large as footballs weighing up to three pounds. The affected turtles have difficulty breathing and eating when the tumors grow in and around their mouths. They have difficultly seeing when the tumors cover their eyes. They cannot turn their heads when the tumors grow on their necks. Internal organs including lungs, kidneys, and stomachs cannot function when compromised by GTFP.

Although a definitive catalyst for the GTFP infections is yet to be determined, many believe that the virus is present yet dormant until the turtles become stressed, quite possibly because of pollution and loss of habitat. As happens in humans and other animal species, stress reduces the body’s natural ability to fight off infections and, in the case of the Green sea turtles, GTFP results.

If one looks at the circumstantial evidence, the GTFP pollution theory seems quite credible. Even though there were a few very rare sightings of turtles with tumors earlier in the 20th century, one turtle with tumors documented in the 1930s, large numbers of infected turtles were not seen until the late 1950s. It was the early 1960s when scientists first began identifying the toxic effects of insecticides and fertilizers on fish and birds.

Back in the 1950s and 1960s, much of the garbage and sewage from coastal towns was dumped in the sea. As human populations grew exponentially many followed their dreams to communities along the shores. Existing infrastructures lacked the capacity to handle the increase in waste so into the sea it went, along with nitrate runoff from fertilized lawns and golf courses.

The Indian River Lagoon in Florida, a prime habitat for Green sea turtles and Bottlenose dolphin, is one of many examples of pristine marine environments gone wrong. Researchers studying several mass dolphin die-offs in the lagoon found hepatitis, meningitis, and cancer during necropsies. Additionally, some dolphins were severely emaciated with empty stomachs indicating the fish upon which they fed are no more. Chemical run-off from the land surrounding the IRL enriches the growth of ‘bad’ alga that, in turn, depletes the oxygen in the lagoon. Without oxygen, little survives.

Is it so farfetched to connect the GTFP infections in the turtles from the lagoon to the dolphins’ deaths and, ultimately, to the pollution in the water?  Moreover, if one makes that connection, does it not strongly suggest that pollution in other parts of the world is likely connected to Green Turtle Fibropapilloma?  Time will tell and, hopefully, there is enough time remaining for all the sea turtles.

After 30 years as a wild and domestic animal rescuer, rehabber, and educator in the states, Becky Bauer became a scuba instructor and award-winning journalist covering the marine environment in the Caribbean. She is a contributing photographer to NOAA.