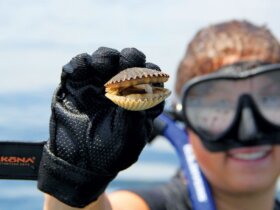 The one-day St. Kitts Sports Fishing Tournament held on St. Kitts November 29 out of the Reggae Beach Bar attracted 16 boats and 69 anglers this year, an increase of three boats over 2008. Champion Boat Good Livin II from St. Maarten was captained by Mike Kopec and crewed by Ricky Smith and Daniel Gibbs.

“We won for most combined weight of 612 pounds,” reported Smith.

The second place boat was Askari (302.5 lb), with Captain Jason Harl from Nevis at the helm. “We were the only boat from St. Maarten—all the rest were from St. Kitts (5 boats) and Nevis (10 boats),” Smith said.

All the fish were caught between 6:30 a.m. and 11 a.m., with a weight-in at 2 p.m. “We were pretty well constantly hooked up all this time, with one quadruple hookup and one triple hookup,” said Smith. “The fish averaged 30 to 40 pounds, with 19 wahoo and one dorado.”