Water is the life-blood of Florida. The state is surrounded by pristine coastal waters and boasts magnificent estuaries that are teeming with fish and wildlife. Its delicate and spectacular springs, aquifers and many lakes are a draw for visitors. But the complex and fragile waters of Florida have been engineered and altered to a state of dysfunction.

Florida has many issues with polluted run-off water contaminating its bays, estuaries, rivers and coasts but two estuaries that are showing themselves to be in particular jeopardy this summer are the St. Lucie River Estuary on the East Coast and the Caloosahatchee River Estuary on the West Coast. Fish and wildlife are disappearing and the tourists are certain to follow. Freshwater discharge is to blame.

Both these estuaries lie on either side of Lake Okeechobee, a large lake in the center of the state that receives its contents from a chain of lakes and the Kissimmee watershed to the north. Water that flows into Lake Okeechobee is being pumped out in huge volumes to maintain mandated safe levels. The high level of water that is being pumped into these estuaries is smothering them with polluted fresh water. There has been so much fresh water that wildlife has disappeared, and natural vegetation such as the sea grass beds and oyster bars are dying off. Salinity levels have plummeted, and as a result, once-clear and pristine waters have turned to mucky brown algae-laden pools. Areas that were once teeming with life are now deserted and barren, with algae blooms being the only visible growth. 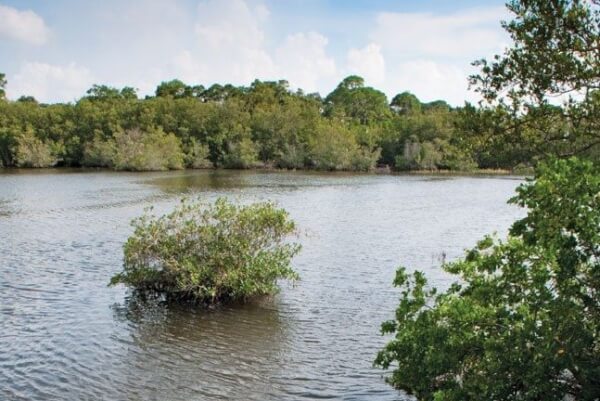 The natural flow of water from north to south has been drastically altered over time by engineering and human intervention. After two devastating hurricanes in the ’20’s that flooded lake Okeechobee and caused widespread local flooding, a levy was constructed to surround the lake. Two cut-off canals were modified and run from the lake to the East and West Coast estuaries. Prior to any modifications, the water would meander from the Kissimmee River Estuary over 100 miles to Lake Okeechobee. Water would then flow south through the Everglades and out into Florida Bay. The Kissimmee River’s natural flow was altered when the river was straightened in the ’50’s by the Army Corps of Engineers, only later to be modified to bring in an attempt to restore a more natural flow into the lake. Still today water rushes south into the lake only to have to be pumped out into the two estuaries. This flow has proven particularly harmful when large amounts of rain cause a rush of water and high levels in the lake. According to South Florida Water Management statistics, water is entering the lake up to six times faster than it can be pumped out.

With heavy rainfall that started in May of this year, Lake Okeechobee reached almost record high levels and, as mandated by federal regulation, had to be lowered. It was determined post-Hurricane Katrina that the levee surrounding the lake was in a state of disrepair and could be compromised with high water levels. The result of this discovery was new mandated maximum levels, forcing the need to pump more water out into the estuaries. Federal funding was allocated for repairs on the dyke and work on one of the worst sections has been completed. However, progress is slow and a secure dyke will not be assured for many years. Work has now shifted from securing the earthen dyke to working on its many culverts. Federal funds are even tighter at present so the future direction of repairs is unclear.

Many, including environmentalists such as Mark Perry of the Florida Oceanographic Society, say that water should be pumped south along its more natural course, thus alleviating pressure on the two estuaries. By sending water into the areas to the south of Lake Okeechobee known as the Everglades Agricultural Area (EAA) pressure on the estuaries to the east and west could be alleviated. One issue with doing so, however, is that 500,000 acres of the approximately 700,000 acres determined as natural filtration for the southward flowing water are now primarily filled with sugar crops. The area to the south of the lake has now been engineered to protect the crops and urbanization farther south from flooding. Most of the water that does flow south is diverted around these areas and has entered the Everglades without the natural filtration it once had. Attempts at remediation of the polluted water flowing into the Everglades has legislative backing but has had only limited success partly due to numerous lawsuits by various groups. Such pollution and runoff is another water management dilemma that is a work in progress.

One project involves building another long bridge on Tamiami Trail (similar to one already completed) that will help in the natural flow of waters into the Everglades that have been blocked by this roadway for many decades. The other proposal is to treat floodwater before it reaches the estuary. Treatment area plans are in the works for both coasts but are just proposals with no funding as of yet and are years away from completion at best.

The South Florida Water Management District and the Army Corps of Engineers are the agencies responsible for controlling the water flow into the estuaries but they are doing so claiming they are under-funded and struggling against a complex and dysfunctional drainage system. They are aware the levels of water they are pumping are harmful but have no other options. Pollution run-off from sugar growers and urban areas adds to the fray, and environmentalists argue that politicians are not doing enough and are siding with sugar growers. Politics and finger pointing aside, as more rain falls the estuaries come closer to being decimated. All agree that something needs to be done to fix the broken flow of Florida’s waters and save the estuaries.

The question now is can it be done before irrevocable damage is done? Will the public outcry be loud enough to be heard?

Glenn Hayeshttp://www.HayesStudios.com
Glenn Hayes is a writer and photographer based out of west central Florida and has marine industry background spanning almost a quarter century. He can be reached through his web site www.HayesStudios.
RELATED ARTICLES
Life