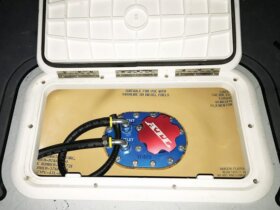 The eagerly anticipated 15th Annual Saint Martin Billfish Tournament held May 30th to June 2nd on the Marigot waterfront was won by the French St. Martin boat Yellow Whip whose crew revelled in the victor’s spoils … a trophy, copious amounts of champagne (mostly sprayed over the crowd), and a cool $19,150 in prize money.

This year the event was organised by the new association Saint-Martin Sport Fishing under the presidency of Philippe Casaubon and governed under the rules of the International Game Fishing Association (IGFA), Federation Française de Pêche de Mer (FFPM), and Big Game Fishing Club de France (BGFCF).

The tournament over the years has cemented its reputation as one of the biggest must-do tournaments in the Caribbean, regularly attracting some 30 boats from around the region and 1,500 visitors per day who flock to the weigh-ins and enjoy the activities in the Billfish Village.

Yellow Whip, the name given to yellowfin tuna by Anguillian fishermen, had the most releases with four in the tournament for 1,000 points to jump to the top of the leader board when results were tallied. They also won the daily prizes on Thursday and Friday for the first releases, and the Marlin winner-take-all jackpot on the last day.

As overall winners, the crew of Yellow Whip qualified to participate in the IGFA Championships in Cabo San Lucas in May 2013.

Second place with 822 points went to Papasan from Trinidad and Tobago.

The prize for the biggest marlin of the tournament (472lb) caught on the first day went to Papasan, the crew pocketing an extra $4,350.

Three marlin were weighed in on Saturday but had little bearing on the overall results. Coyote Girl had one big marlin on the scales but it was damaged on the tail by the boat’s propellers and disqualified. Another marlin caught by Small Change was under weight, and the third caught by Dream Catcher from Guadeloupe just qualified at 349lb.

“Not a lot of fish this year compared to past years, but the weather was perfect”, noted Yellow Whip’s Owner/Captain Laurent Petit. “We did real well and we were the youngest team. On Friday we thought we had a blue marlin release but because of photo issues it ended up being a white marlin release for 150 points instead of 250, but we won this tournament on the last day.”

Only four marlin were weighed-in during the tournament but some 25 in total were caught and released. As Petit pointed out, a lot of releases mean bigger fish to catch next year.

Nobody broke the existing record of 809lb set by Cassinhoa in 2011 and St. Martin Cars with some relief returned their prize, a Nissan Navara pick-up, to the showroom.

This year’s prize money was calculated as a percentage of the total registration fees. First prize was 25% of entry fees, second prize 15%, third prize 10%, and the daily prize 5%.

A total of 29 boats from around the region participated in the tournament. A good crowd turned out each day to view the boats and enjoy the entertainment, fashion shows, the Dazzling Diva Dancers, and live music on the waterfront.

Robert Luckock is a British journalist and freelance writer residing in St. Maarten. He is currently The Daily Herald’s correspondent for French St. Martin and was one of All At Sea’s very first contributors.