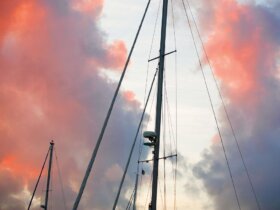 Every Cloud Has a Silver Lining

Thereâ€™s many other How-To books I want to write: “How To Say Nothing in 100,000 Words”, “How to Pretend to be an Expert on Subjects Your Readers Know Even Less About”, and “How Not to Smirk” are just a few.

Yikes! I just wrote a book entitled STORM PROOFING YOUR BOAT, GEAR, AND CREW and, suddenly, a bunch of people who donâ€™t know me think I care whether they live or die. Weird, eh? Evidently they donâ€™t understand modern book marketingâ€”the question isnâ€™t whether their corpses wash ashore on a Caribbean beach but rather, prior to their death, did they order the Kindle version or a dead-tree book?

â€¦ did they write a book review on Good Reads or Amazon?

â€¦ or were their lives completely wasted from my perspective?

Thereâ€™s a lot of humor in my bookâ€”for instance the hysterical section on shackling your anchor to your scrotumâ€”but most of my low IQ readers miss the joke, and, well, all of my high IQ readers are non-existent.

I mean, is any sailor really going to attempt to deploy his JSD (Jordan Series Drogue) while snubbing it off on his â€˜soft bitsâ€™ rather than his hard bitts?

Surely they know Iâ€™m being tongue-in-cheek when I tell them I wake up my sleeping wife from her offwatch by attaching a Kevlar string to her big toe â€¦ and then tossing over the Gale Rider. (Never, ever has this failed to wake her upâ€”although, alas, once it did knock her unconscious on the companionway ladder as she went shooting up through the cockpit like a naked blood swab.)

I know, I knowâ€”people say I lack compassion, but why would I care how they feel?

The new book just isnâ€™t PC. Thereâ€™s sexism in itâ€”for instance, on the section of towing drogues I discuss mother-in-laws at length. The Donald. The entire staff of Faux News.

Actually, I intended to name my new book STORM SPOOFING but my ultra-dumb wife/editor Carolyn misheard.

Thereâ€™s almost nothing I can say in my own defenseâ€”but, of course, as a professional journalist, that wonâ€™t stop me.

For instance, many newbie sailors donâ€™t realize that SAR works slightly differently in the States versus the Lesser Antilles.

If I fall overboard off Newport, I call the USCG on my HH waterproof VHF, give them my precise locationâ€”and then report I just saw a swimmer smoking a jointâ€” and bam, they arrive lickety-split.

Itâ€™s different in Bequia. First off, they show up lickety-spliffâ€”and they bring the papers or a pipe, knowing I wonâ€™t have anything dry.

Many American yachties are ill-prepared for bad weatherâ€”but love those US taxpayer subsidized helicopter ridesâ€”especially since many of the younger USCG dudes will now allow you to bring your rum drink as they hoist you heavenward in the basket.

â€¦ wow! What a view! Media coverage! A GoFundMe page!

Yeah, life is strange. Kitty Genovese is stabbed and raped in NYC for hours while her apartment mates draw the curtainsâ€”and we yachties complain if the SAR chopper is ten minutes late or lacks a well-stocked bar.

On the other hand Kitty didnâ€™t own a yacht with an EPIRB, so what did she expect?

When I first decided to write a book featuring Jordan Series Drogues, I figured I was fairly qualifiedâ€”then my meanie-to-the-max wife shook her head negatively and said, â€œFatty, it is J-S-Dâ€¦ thatâ€™s a J, not an L.â€

In any event, I believe in education. Give a man a fish, and you feed him for a day. Teach a man how to catch some square grouperâ€”and he and his homeboys can party for a year!

Which brings us back to the subject of strong rum and how its intoxicant is measuredâ€”for instance, if you chugalug a whole bottle of Bacardiâ€™s best, 151 fellow sailors will have scientific proof youâ€™re drunk.

On the other hand, why not have your foulies made out of latex if it turns you on?

Thereâ€™s many other How-To books I want to write: How To Say Nothing in 100,000 Words, How to Pretend to be an Expert on Subjects Your Readers Know Even Less About, and How Not to Smirk are just a few.

Oh, no, my Lite Thoughts on Heavy Weather book isnâ€™t for everyoneâ€”for instance, I have a section entitled Life Raft Etiquette. Thatâ€™s right, Iâ€™ve instructed my wife not to staple up any cheesecake pics of me in the life raft, regardless how much she enjoys looking at â€˜em.

â€¦ forget the handcuffs, thanksâ€”they are bound to rust.

Sure, Iâ€™d like to allow my wife into the life raft to join me as well but, hey, it says 8 MAN, and I donâ€™t want to break the rules.

If my STORM PROOFING book really takes off, Iâ€™m going to come out with a complete line of â€˜Storm Strutterâ€™ merchandiseâ€”say, a PFD filled with concrete for your ex-marriage partner, some pre-chafe drogue-rode to your baby-mama (two babies back), and, of course, a Clorox bottle wrapped with lot of string to toss over to mark your mid-ocean grave.

What could be nicer?

Editorâ€™s note: Fatty and Carolyn are currently cashing their royalty checks in Africa.Â

Capâ€™n Fatty Goodlander and his wife Carolyn are currently on his third circumnavigation. Fatty is the author ofÂ Chasing the HorizonÂ and numerous other marine books. His latest, Storm Proofing your Boat, Gear, and Crew, is out now.Â Visit:Â fattygoodlander.com