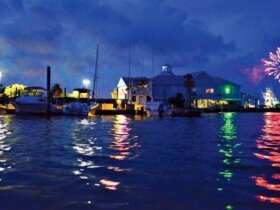 Celebrate the Fourth of July – On The Water!

I was excited when I saw a brief report on TV about the burgeoning industry of Bluefin tuna aqua culture in Japan. The scientist interviewed in the report touted the benefits of fish farming: sustainable, conservation friendly, employment, and less expensive than sending huge fleets out to sea. Finally! I could report a change in Japan's attitude toward the world's seas and marine life. I began an article, happy to have something positive to write.

As I reported in "Showdown for the Bluefin" in the March 2010, issue of All at Sea, 80-90% of wild Bluefin stocks vanished during ICCAT's (International Commission for the Conservation of Atlantic Tunas) 40-year reign as the managing authority for Atlantic Bluefin tuna. Consistently ignoring scientific data, including that developed by its own scientists, ICCAT failed miserably in regulating commercial Bluefin fishing.

Because ICCAT failed in its 1969 mandate to "maintaining the populations of these fishes at levels which will permit the maximum sustainable catch for food and other purposes …" a proposal to ban commercial international trade in wild caught Bluefin was put on the table at the annual CITES convention this year. (CITES is the Convention on International Trade in Endangered Species of Wild Fauna and Flora.)

On March 18, 2010, in Doha, Qatar, the proposal to ban was defeated, leaving the world's decimated Bluefin stocks once again at the mercy of ICCAT's habitual failures. The vote was 20 in favor and 68 against with 30 abstentions. Thus the voting members of CITES issued the Bluefin Tuna's express ticket to extinction.

Expecting that Japan supported the proposal as indicated in the many PR articles on its Bluefin farming industry, the reality was much different. According to Michael Casey, an AP reporter observing the CITES convention, Japan took the lead in assuring the proposal was disastrously defeated. "Japan won over scores of poorer nations with a campaign that played on fears that a ban would devastate their economies." Once again, Japan's "winning" means marine life loses.

If Japan were truly passionate about its growing Bluefin tuna farming, why would the country vehemently oppose a ban on the international trade of wild caught Bluefin? It seemed incredibly counter intuitive.

Wouldn't banning international trade in wild caught Bluefin be an economic boon to a country farming Bluefin? Wouldn't it be easier, faster, and much less costly for a Japanese sushi bar to purchase a Bluefin from a fish farm down the road rather than sail from Japan to the North Atlantic for the same fish?

Therefore, I started digging and, not surprisingly, I discovered, yet again, Japan's adeptness at putting a spin on its fishing activities. Banning international trade in Bluefin would have a devastating effect on Japan's Bluefin aquaculture. How can that be?

Having lived for many years at a fish hatchery and rearing station, I assumed the Bluefin in the Japanese fish farms were reared from roe (eggs) from captive brood stock. Japan failed to mention their aqua culture stocks come directly from the wild while leading readers and viewers to believe their stocks came from years of culturing at research facilities.

Because the 80-90% of wild Atlantic Bluefin was lost since 1969, most of the remaining stock is immature. Japan now sails the Atlantic taking millions of tons of immature Bluefin. They are kept alive in tow nets behind ships sailing back to Japan. Bluefin aqua culture in Japan does nothing to reduce the pressure on wild stocks and, in fact, further decimates the wild stocks because the immature Bluefin taken to populate fish farms never have a chance to mature and reproduce.

In addition, wealthy Japanese diners, who consume 80% of the entire world's catch of Bluefin, allegedly complain that the farmed Bluefin do not have the same flavor. It would be interesting to know if blind taste tests were conducted or, if this is another spin put forth by those who recently sold a wild caught Bluefin at a Tokyo fish market for over $200,000 and the chefs who sold small pieces of that fish for $25 and up?

Money talks. The $200,000 Bluefin and its brethren did not feed the poor as they used to before Japanese sushi became popular. When Bluefin became a rich man's delicacy, the pennies per pound price that fed the poor increased to as much as $150 per pound.

The world has lost 80-90% of the wild Bluefin stocks over the past 40 years. The defeat of the trade ban and ICCAT's lack of management means the Bluefin will be added to the list of extinct species very soon. According to the science, Bluefin will be "functionally extinct" by 2012 because there will not be enough spawning fish left to reproduce.

Becky Dayhuff-Bauer became a scuba instructor and award-winning journalist covering the marine environment in the Caribbean after 30 years as a wild and domestic animal rescuer, rehabber, and educator in the states. She is a contributing photographer to NOAA.