In this How to Buy an Outboard Motor series of articles we have looked at current offerings in the four-stroke and two-stroke outboard motor market from many major manufacturers. We have explained how they work and what the truths, myths and misconceptions are when choosing an appropriate engine for your application. In the spirit of exploring all the options, we would be remiss if we did not look at alternative energy outboard engines such as the electric outboard motor and propane outboard motor.

This category is relatively new to the outboard motor market and is gaining in technology, ingenuity and popularity at a rapid rate. Advancements have moved these motors (be it mostly in the smaller kicker category) to the forefront and they have a great future.

One form of an alternative outboard motor to the traditional gas combustion engine spoken about widely in the automotive industry is that of an electric or gas-electric hybrid outboard motor. This technology is now making a foothold in the marine market, too.

An electric outboard motor on boats have commonly been thought of as trolling motors that propel at relatively slow speeds, enabling fishermen to cover more area while casting for the big catch. But now there are more offerings and options, including some that can truly replace a gas outboard and provide the same performance as smaller combustion outboards. Companies such as Torqueedo now offer 13 electric outboard motors from one to 15 hp and have motors capable of comfortably pushing vessels up to four tons.

This technology came about as a need by Torqueedo’s founder for an electric motor that could propel his boat in Germany on a lake that had banned gasoline engines. The technology did not exist at the time to provide the required performance, so he founded a company to develop a motor that could. Torqueedo’s latest generation of motors is up to the task and uses some innovative technology and engineering.

What is at the Heart of the Electric Outboard Motor?

The heart of their product is a brushless motor that is made with rare earth magnets. The motor is powered with lightweight clip-in modern technology lithium batteries and their larger touring ‘Cruise’ series motors can be fueled with wet cell or AGM batteries. All the power generated ends up at an oversized polymer prop similar in design to those found on large vessels. This large prop allows for the propeller to turn slower than a traditional one but produces more thrust at a lower RPM, translating to a very efficient movement through the water. The thrust claimed by the electric outboard motor is rated differently from traditional trolling motors and, according to the company, 50% more thrust should be added to their motors’ specifications to compare with traditional electric trolling motors.

Other features, such as a built-in monitor, allow the user of the electronic outboard motor to take all the guesswork out of wondering how much power is left or how far the motor can take them on the batteries’ power. All the user has to do is look at the monitor and adjust the throttle as required to increase range.

The power of a electronic outboard motor goes a lot further in their latest generation of motors. Improvements in efficiency and battery technology have increased range to a very respectable and usable amount. An example would be the performance of the largest of their current line-up: the 4.0 R motor connected to four of their Power 26-104 lithium batteries can push an 18-foot, lightweight skiff at half throttle at a speed of 9.9 miles per hour for 17.4 miles with a run time of two hours. If a longer run time is required, Torqueedo engineers have even come up with a solar panel that will charge batteries while underway.

The electronic outboard motor is very quiet when running and of course do not have the issues of remote fuel tanks as do their gasoline counterparts. Although the electronic outboard motors are lighter than comparable motors, the additional weight of remote batteries should be considered when deciding on which motor to go with. Torqueedo’s smaller motors have batteries that attach directly to the motor (in place of onboard tanks in gas motors). These lightweight motors are designed to be highly portable and are a good option for cruisers with a tender, where the motor is taken on and off the tender often.

Technology is constantly improving and as each generation arrives, efficiency and reliability increases. Although limited to smaller motors, the power of the light electronic outboard motor is increasing and they are now a viable option for specific applications and are worth considering.

The propane outboard motor is a relatively new option in the outboard market. There have been propane outboard refit kits available for some time, where the kit replaces the carburetor or injector system with a propane delivery system. With a resulting partial loss in horsepower, these systems have yet to develop to the extent that they are accepted the way their automotive counterparts are. Propane, for whatever reason, has just not been viewed as a viable option. However, a new offering in the outboard category is catching on and making strides.

LEHR has introduced two small propane outboard motors that were designed from the ground up to run on propane. With current offerings of a 2.5HP and 5HP, long and short shaft motor and plans on manufacturing larger motors in the near future, these portable propane outboard motors are proving quite popular and are winning awards.

Developed by maritime captain Bernardo Herzer, these small propane outboard motors run on either a regular propane tank like the one you use for your BBQ or a small twist-on disposable tank, the type used for small camping stoves. If using the larger tank option, a line runs from the tank (they offer a polymer, non-corrosive tank for longer range without rust issues) and just connects to the front of the motor. With no priming, choking or carburetor issues, you just pull start the motor and you’re on your way. If portability or refilling the larger tank is a concern then either model motor can be run on a disposable tank that clicks into an opening in the cowling. Fueling these motors with readily available propane-filled tanks eliminates the concern of spilling gas, fumes of stored gas and gummed tanks and carburetors.

The efficiency of the propane outboard motor is reported to be comparable to gasoline motors in that each pound of propane will perform roughly the same as a gallon of gas providing similar power and range. There are claims that they can be as much as 14% more efficient than gas, but at the very least, performance of the motors is comparable to any 2.5 and 5 horsepower gas outboard. Physical specifications are also comparable. Apart from the oil in their crankcase and the disposable tanks (which are 100% steel and can be recycled) propane outboard motor emissions make these truly green engines. One just has to look at the environmental awards and accolades the motors have already received to see this is a major benefit.

Glenn Hayes has reported on outboard motors since the magazine’s inception in March. He can be reached online at hayesstudios.com. 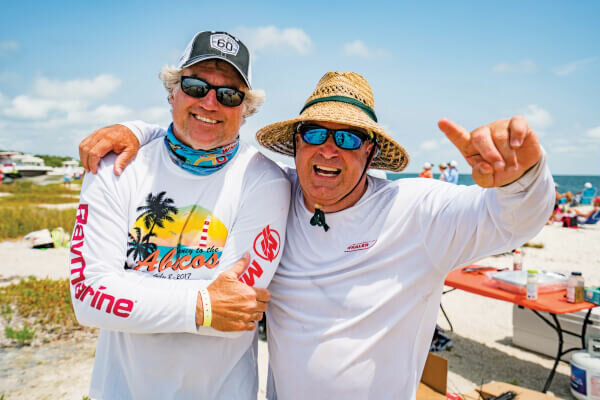