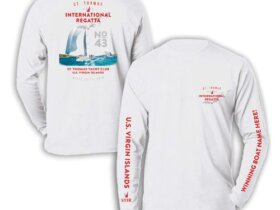 New crews, new boats, and new race courses were the big news at the 15th annual St. Croix International Regatta. The February 9-10 event, raced out of the St. Croix Yacht Club, was the kick-off for both the northern Caribbean’s regatta season and for the Cape Air Caribbean Ocean Racing Triangle (C.O.R.T.) series, which included the Culebra Heineken International Regatta in March and BVI Spring Regatta & Sailing Festival in April.

Devil 3, a Melges 24 sailed by St. Croix’s Stanton brothers, successfully defended its title as most competitive boat in the most competitive class to win skipper Chris Stanton’s weight in Crucian Rum.

Yet this year, different from last, all three Stanton brothers were racing together.

“I’m back from college and able now to race with my brothers,” says Scott Stanton, who trimmed the jib, while brother Peter called tactics and Chris drove. “The other Melges and J-Walker came close upwind, but we really pulled away on the downwinds.”

Tortola’s Dave West also had new crew aboard his Melges 32, Jurakan, which takes the name of the Taino Indian god who controls the wind. “Everyone was from Tortola,” says West. “For example, Robbie Hirst was our tactician.”

St. Croix’s Chris Schreiber had a new boat, new sponsor and new crew out on the course. “We match-raced our Hobie 16, Auto World Express, against Paul Stoeken’s Islandsol.net the whole weekend,” says Schreiber, Sr., who drove with Chris Schreiber, Jr., aboard as crew. “It was close racing and all good fun, especially when the winds went to 25-plus knots in a squall.”

The Melges 24 that gave the Stanton brothers a run for their money the first race – before they blew a spinnaker halyard – was Morgan Dale’s Silver. Formerly of the Crucian racing team aboard Sorceress, Dale says, “The Melges 24 is like a big laser on steroids. It’s the most fun bang for your buck. Also, it’s got fewer crew – four or five – which makes the whole organizational aspect easier. There’s a big learning curve, but we had a great time. In these winds, we just popped the chute and said, ‘Vieques here we come!’”

St. Croix’s Rob Armstrong’s J/100 Bad Girl won its class at Key West Race Week. But it was his other J/100, Expensive Habit, which he’s campaigning for this coming Caribbean season. “We’ve got Expensive Habit optimized for CSA (Caribbean Sailing Association handicap),” says crewmember, Carlos Skov. On board for the St. Croix regatta was Jens Hookansen, a fellow Crucian and 2004 J/24 World Champion. “You could say we have a lot of experience in the back of the boat,” says Skov.

Two of the most eye-catching boats on the course were OnDeck Ocean Racing’s Farr 40s. “The company wanted to get the boats race charter ready, so my brother, Ben Beer and I have been helping them,” says John Holmberg.

For the St. Croix Regatta, Holmberg says, “We put out the word for crew and got over 30 responses from throughout the Caribbean and U.S. mainland. In the end, it turned out that Medina had primarily Crucian crew and Bandit was filled with St. Thomas sailors.” The Thomians won.

Missing this year was a Performance Cruising class.  Class veteran, Tom Mullen, who has raced his J/120, Shamrock, in the past, instead chartered an IC24, Mr. Ripley, for this year’s competition.

There also wasn’t a Large Multihull class.  Regatta director Julie San Martin says, “This is the first year in 15 that we haven’t had the large cats.”

Sadly, David Flaherty’s St. Thomas-based Etchell 24, Ghost, gave up the ghost and called it a season early. The boat drifted overnight and was destroyed on a reef bordering the west side of Teague Bay.

New this year, the race committee ran a course that took the non-Spinnaker boats into Christiansted harbor.

“Back in the early 1990’s, we ran the entire fleet into the harbor,” San Martin explains. “It didn’t work. The harbor entrance is too narrow. We had rammings, crisscrossings and even a beach cat that sunk, so naturally we discontinued it. But recently, the non-racing boats have asked for a different course and so we tried it again.”

St. Croix sailing and racing veteran, Nick Castruccio, skippered his J/30, Annick II, on the harbor course. “It was fine until we hit the number 9 buoy and almost ran aground,” Castruccio said with a good-humored smile.