If you ask residents of Water Island about visiting, the answer will be “don’t, there’s nothing to see.” That’s because this nearly 500-acre island located a mile from the mainland in St. Thomas’ Charlotte Amalie harbor, is a quiet, laidback hidden gem.

“Among the U.S. Virgin Islands, St. Thomas is the cruise ship destination, St Croix is all (Alexander) Hamilton and history and St. John is known for the National Park. Water Island has no distinction. It’s almost like the motto is, ‘We have everything St. John has and a LOT less’,” says longtime resident and local radio personality Alex Randall. “It’s small. There are only 163 permanent residents. There are no stores, no trucks, no buses and no city (unless you call Phillips Landing with a ferry dock and the post office boxes a ‘city’. The phone booth blew away in a hurricane. No cars. That’s right; residents get around in golf carts. Visitors can go up the hill from Phillips Landing and rent a cart from Rachael’s Cart Rental.”

One thing Water Island does have is water. History tells that seagoing Europeans, including pirates and privateers, stopped here as early as the late 17th century for fresh water from the natural ponds. Legend also tells these same folks buried gold coins in a chest somewhere on the island. Where there’s water, there’s wildlife. In fact, a survey of the island conducted by the US Southeast Archeological Center of the National Park in 1992 showed several prehistoric sites on the island that date back to the indigenous Tainos. The red-footed tortoises and green iguana on-island today are lasting reminders of past stocking by these Caribbean people. The Europeans, including the Danish who claimed the island in the early 18th century, found even more food around Water Island’s ponds like ducks, pelicans and flamingos. Today, you can still visit Flamingo Pond, located directly behind Honeymoon Beach. It no longer is fresh water since a channel was cut to the sea half century ago to give boats a hurricane hole. However, it’s still possible to see plenty of birdlife here.

Fast forward to the 20th century, and in the wake of the Danes selling the Virgin Islands to the US in 1917, the US Department of Defense took over operation of Water Island during World War II. According to a historic report by the Water Island Civic Association, the US Army’s Chemical Warfare Division tested chemical warfare agents like Agent Orange on parts of the island. This is the era when Fort Segarra was started, but never finished.

“The remains of the old fort give visitors one of the most spectacular vistas in the Virgin Islands. It’s a 360-degree view of the surrounding ocean and all the neighboring islands. That alone is worth the golf cart rental to find the old fort and take in the brisk wind atop the lookout tower. Bring a flashlight, because exploring the underground fort requires one as well as real shoes rather than flipflops or sandals,” says Randall.

Post-war, the island was handed off to the Department of the Interior and then leased to private developer, Walter Phillips, who turned the island into its present day residential community. The Water Isle Hotel & Beach Club was built in the mid-’60s and closed permanently in 1989 due to damage from Hurricane Hugo. Some say this was the imaginary Gull Reef Club on which author Herman Wouk based his novel, Don’t Stop the Carnival. You can still visit Flamingo Point, where the hotel was located although today there is a private home there.

Today, Water Island is owned by the Virgin Islands territorial government and often called the ‘fourth’ Virgin Island after St. Thomas, St. Croix and St. John. It’s most recent claim to fame is a short appearance in the Hollywood movie, the Curious Case of Benjamin Button where stars Brad Pitt and Cate Blanchett watched the sunset from Honeymoon Beach.

“The beach at Honeymoon Bay is a quarter mile of delightful sand at the base of a small bay,” says Randall.  “At the north end is Heidi’s Honeymoon Grill, where breakfast and lunch are served Monday through Friday and Heidi’s famous dinners on Saturday night. She also strings up a movie screen between two palm trees on Monday nights (in season) and shows movies while serving hot dogs, hamburgers and popcorn. At the southern end of the beach is Dinghy’s, a tiki bar with a restaurant that serves specials like fish tacos. Dinghy’s hosts occasional live bands and beach dance parties.”

If you do decide to ignore this local’s advice and visit Water Island, here’s how to do so: Cruising yachts can drop anchor in Honeymoon Bay. There are no public moorings. Day visitors can come over on the Water Island Ferry that leaves Crown Bay Marina on St. Thomas on the hour. But, don’t tell anyone else! 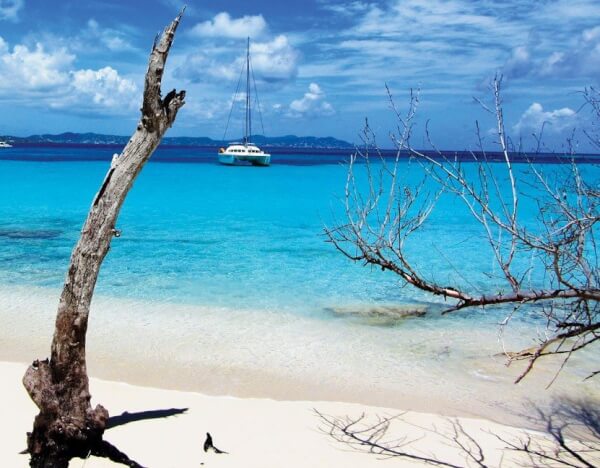 Colorful as a Conch Horn, Solid as a Lignum Block: Manfred...