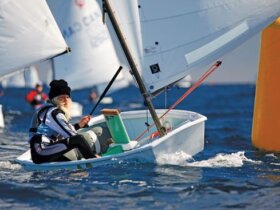 Another Title for Odile van Aanholt

The America’s cup is a match race for a 159 year-old trophy first won by the yacht America from England. The original winners of the cup donated it as a perpetual trophy, governed by a document called the Deed of Gift. The Deed of Gift states:

“Any organized Yacht Club of a foreign country, incorporated, patented, or licensed by the legislature, admiralty, or other executive department, having for its annual regatta on ocean water course on the sea, or on an arm of the sea, or one which combines both, shall always be entitled to the right of sailing a match for this Cup, with a yacht or vessel propelled by sails only and constructed in the country to which the Challenging Club belongs, against any one yacht or vessel constructed in the country of the Club holding the Cup.”

The intention of the donor, George L. Schuyler, is that the yacht clubs as gentlemen agree on the terms of the race. In case the parties could not agree on the terms, he set out some very general rules for the match. Only twice in the history of the cup have the clubs been unable to agree on the terms of the match. The first time was when Dennis Conner raced his wing-sailed catamaran against New Zealand’s big white monohull; this type of an America’s Cup is known as a DOG match as it refers directly to wording of the Deed of Gift. Since then it has become common practice for a team about to win the Cup to already have a challenge from a friendly yacht club negotiated to avoid the possibility of a hostile challenge.

On July 5, 2007, after successfully defending the 32nd America’s Cup, Alinghi and its club, the Societie Nautique de Geneve, announced the Challenger of record, the CNEV, and outlined the protocol for the 33rd AC. For various reasons, including the fact that the yacht club, not the sailing team retains all rights to the Cup, the CNEV was a club that was formed two weeks before becoming the challenger of record.

Oracle submitted a challenge of its own specifying a yacht with a 90′ length on waterline and 90′ beam on waterline; Alinghi rejected Oracle’s challenge. Alinghi already had what they believed was a valid challenge, and several other teams entered to participate. BMWO went to the New York Supreme court and began the most contentious legal battle in AC history. Needless to say, BMWO was successful in their legal assault, and became challenger for the second DOG match in history.

While the current situation has been damaging to the cup community and all the teams that have been left out of the competition, for the designers and sailors involved it has been a once-in-a-lifetime opportunity. In past campaigns, we have all worked under a very strict design rule that limits the design space that we designers can explore. For this campaign, the only rules were that the length on load water line (LWL) not exceed 90′, as spelled out in the Deed of Gift:

In this case, we had an absolutely blank sheet of paper to dream up the fastest boat to get around a race course. Can you imagine a kid in a candy store?

As a group we assembled at our team base in Valencia late in 2007 and began to develop an outline of areas to focus our design efforts. Any design effort usually begins with a review of previous designs, and a study of strengths and weaknesses of your competitor.

We began to develop a rough picture of the yacht that our competitor would race. Oracle had hired the French design firm VPLP, who had designed the most advanced ocean racing trimarans including Groupama 3 and the recently-launched Banque Populaire V. The 90′ beam and 90′ LWL dimensions that BMWO specified in their challenge documents match the length to beam ratios of a lot of their recently launched designs. Groupama 3 was a pretty new boat at the time and, although designed for ocean racing, had similar dimensions to what BMWO specified. It seemed logical that Oracle would develop a lighter grand prix version more optimized for inshore America’s Cup racing. The thing that Oracle did not know at the time was what sort of wind they would be sailing in.

The challenger has the right to set the date of the match with their challenge, but the defender has the right to choose the venue and, in that sense, the wind conditions. Strategically, you try and evaluate the strengths and weaknesses of your opponent and then try to leverage your position to take advantage of their weakness. The Alinghi sailing team has a long history of racing super lightweight, massively overpowered multihulls on the nearly windless Lake Geneva. Since the BMWO design team had a history of experience with off shore around the world Trimarans, it was surely of no surprise then that we began thinking in terms of maximizing light wind performance. Since a light wind boat needs to be feather light, it was decided early on that we would be building a catamaran rather than a trimaran, since a catamaran is naturally lighter.

The Alinghi design team started this project with very little experience designing multihulls. To get up to speed on multihull design and sailing, we got to take some very interesting field trips. The design team joined in on one of the sailing sessions with Alain Gautier’s Foncia Orma 60 Trimaran in Lorient France, sailing in VX 40’s in Valencia, Spain, and a re-launched version of Le-black 41, the famous Alinghi catamaran on Lake Geneva. During this phase, all parts of the design team started to formulate ideas and concepts for the big boat we were preparing to build.

My responsibility as the rig designer includes everything above the deck, basically the mast, boom, rigging, but not the sails. I like to use a car analogy to describe what the rig does. The sails are the engine of the boat, the platform (hulls and beams) in a multihull is the chassis, the centerboard-rudder package is the wheels, and the rig is the transmission. Like a car transmission, the rig takes the loads from the sails, and delivers it to forward motion of the hull and appendages, and like a car transmission with different speeds, the rig has controls to adjust the shape of the sails for variable conditions. It is logical then that I work very closely with the sail designers and also the platform designers and engineers. In fact, one of the great strengths of the Alinghi design team is that it is an extremely tight unit; everyone works extremely well with everyone else, something that is rare in an environment where everyone is arguably one of the best in the world at their area of expertise.

Initially, a lot of work is done to define the concept of the whole boat, including the rig. Unlike the rigs of the previous Cup class, these rigs cant-rake and rotate on a titanium ball the size of a tennis ball. Once you define the concept you enter what is called a design spiral, not because it makes your head spin, but because you are sort of like a dog chasing its own tail.

A computer model of the boat is built to evaluate the performance tradeoff of each design variable. You usually don’t get anything for nothing – for example, increasing the overall beam of the boat will increase the heavy wind performance at the expense of being able to fly a hull earlier. The process of finding the optimum balance is a bit like the dog chasing its tail because each variable depends on the other. The sail designers may change one variable in his sail design which produces a new and different set of loads that the rig needs to react. This innocent change means that the structural design of the rig needs to be modified, which of course changes the structural weight, and hence there is suddenly a new optimum hull shape. This of course means that the sail plan can be optimized to the new hull shape, and you see what I mean about the dog chasing its tail.

Eventually you do pull out of the spiral, not because you can’t continue in the spiral, but because eventually you have to start building the boat. This is where the fun really starts because you have dozens of anxious builders looking for drawings to build the next piece of the puzzle. Unfortunately, the design team did not grow accordingly to the size and scope of the project. Needless to say it was an enormous challenge to complete the millions of calculations, produce the thousands of drawings, and build the hundreds of parts required to assemble the AL5.

The final test of the design came in February 2010 in Valencia Spain. Ultimately Alinghi was unsuccessful in their attempt to defend the America’s cup. The scorecard makes the boats appear much more mismatched than I think that they really were (I may still be in denial).

Remember earlier in the story, about deciding to design for light wind conditions? That only works if you can end up sailing in light wind conditions. BMWO did a better job in their legal strategy than Alinghi, and managed to disqualify our venue choice of Ras Al Kamiah in the United Arab Emirates, which would have produced a light but stable building sea breeze. While the breeze during racing in Valencia appeared to be very light, at the top of the nearly 200 ft-tall mast, the breeze was slightly higher than AL5’s sweet spot of under 8 knots.

Oracle did a great job on their part and produced an amazing wing sail, just months before the regatta. It was a pretty big gamble on their part because such a revolutionary new design can often have lots of unforeseen problems and jeopardize an entire campaign. All credit to their design team for producing such a weapon.