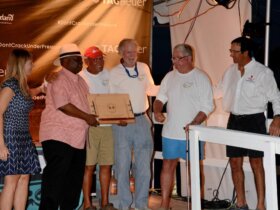 There was something for everyone at the Aruba International Regatta, held August 18 to 20 off Surfside Beach. For example, classes for the 37 entries ranged from those for large keelboats to small optimist dinghies, winds blew from a near breathless two to blustery 25 knots and entries came from as far away as the U.S., Puerto Rico and St. Maarten to the nearby fellow ABC islands of Bonaire and Curaçao. Two points stood out. First, there was an unprecedented seventh in a row overall victory for the J/35 Dash in the racing class. Secondly, the regatta served as a trendsetter for sustainability at Caribbean regattas.

“We only had Dash for six weeks when we entered the regatta, so our hopes were set on doing as well as we could without expectations,” explains regatta organizer, Eric Mijts, who purchased the boat in July from Curaçao’s Remco van Dortmondt, who sailed his rival J/105, Vuja De. “Winds didn’t exceed six knots at first, so the first race was long. Winning it for us was based on balance and tactics. We also won all the other races, which gave us the win in racing class. We knew the speed potential of the Dash, but we were surprised how easily we managed to make the boat work optimally.”

Open Class racing was equally exciting, with Aruba’s Anthony Hagedorn’s Ocean 505, Moore 24, finishing first. This proved an incredibly sweet feat considering Hagedorn, who has sailed this event for many years and on many boats like Sunfish and a Grand Soliel 43, opted to race a friend’s neglected boat this year. The craft hadn’t been hauled out for three years, the mast was out of tune, and the spinnaker and mainsail were both made out of 2.7-ounce cloth heavy enough to suit a boat twice the size.

“The secret to our success was good starts and lots of patience with a rookie crew except for one, my nephew, who knows the boat and did jib and kite trimming duties,” says Hagedorn. “Of the other two, one never raced and the other never sailed under spinnaker; the latter did fore deck duties. We kept it informal, gave calm instructions to the crew and made lots of funny jokes, but all the while concentrated on the business we had come to do.”

Dinghy classes didn’t lack for thrills either as Aat Hoek, who won the Beach Cat class with crew Theo Kock, aboard his Nacra Inter 20, can attest. In fact, racing for Hoek and Kock began with a shakedown sail from the boat’s regular spot at the Fisherman’s Hut on the north side of the island to the regatta’s venue near Oranjestad to the south. The first day’s light air racing proved challenging, yet the duo ended first in the six-boat class. The sailing wasn’t as smooth for the duo on the second day.

“The winds came back with a vengeance to typical 20-plus knot Aruban conditions,” Hoek tells. “Unfortunately, we pushed a bit too hard and ripped our front sail completely. That meant the end of the first race for us and a score thankfully we could drop. We had a chance to fix the boat and start again for the second race in the afternoon thanks to Theo’s wife, Ageeth, who risked her life by picking up a spare jib sail on the other side of Oranjestad by motorbike and bringing it to us. That made Theo and I even more motivated to defend our first-place position and we ultimately did.”

The Aruba International Regatta received gold status this year from the Newport, Rhode Island-headquartered Sailors for the Sea Clean Regattas Program and lived up to this reputation thanks to the efforts of sustainability officer, Anita Aerts, who set up a number of activities to promote responsible resource management during the event. One of these was the making of the regatta awards from reclaimed plastics and wood by the Aruban sustainability initiative Brenchie’s Lab. American sailor and environmental activist Tyson Bottenus gave a talk at the awards ceremony about Sailors for the Sea’s initiatives.

“The event brings together the sailors of different disciplines and from different places in the world, to celebrate sailing and friendship in a sustainable fashion,” says Mijts, who with the help of Joost Horward and Anthony Hagedoorn organized the successful regatta. “Special thanks to our sponsors and valuable support of the Dutch marines, who provided safety and support at sea.” 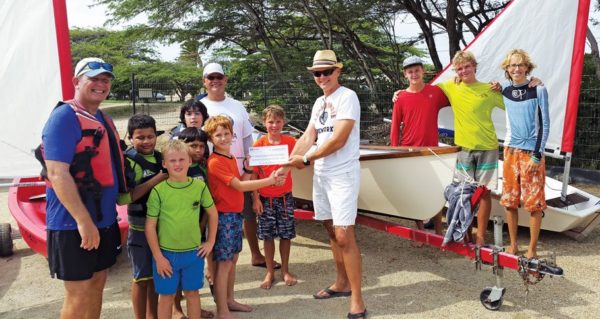 ARUBA SAILING SCHOOL RECEIVES DONATION FROM BOAT SALE
It was a ‘sell a boat to buy more boats’ philosophy that led Aruban entrepreneur and amateur boat builder Rik van der Vaart to donate the US $1500 he received from the sale of his newly-built Welsford-designed 15-foot open fishing boat, called a Seagull, to Stichting Youth Watersports Aruba (SYWA) to expand its fleet of Optimist dinghies.

“The vision behind this was that the more kids that learn how to sail a boat, the better it is for Aruba,” says van der Vaart, who received assistance on the build from Yair Lichtenstein. “Aruba’s nature and ocean are so beautiful and offer a great opportunity to teach kids sailing and appreciate nature even more.”

Kooyman Aruba donated wood and plywood for the boat. Studio Advisory, the main sponsor of the Aruba International Regatta, contributed the rest of the needed materials such as epoxy, varnish and deck plates.

Van der Vaart and Lichtenstein began building the Seagull in August 2013 and finished in July 2017, putting an estimated 350 manhours into the job.

A symbolic ‘check’ was presented at a small ceremony at the SYWA school in September, with the young students and instructor in attendance.

For more information about this project, visit: www.studio-advisory.com/Seagull