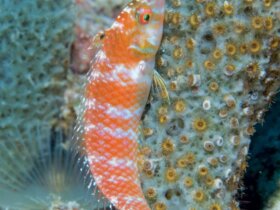 The boats entered outnumbered the blue marlin released at this year’s 48th Port Antonio International Marlin Tournament (PAIMT), held October 15th to 22nd, out of Port Antonio, Jamaica. Yet this didn’t dampen the fun, excitement and ultimate suspense to see who would win. On the final day, as lines out was called across the 38 boat fleet with 186 anglers from Canada, the U.S, Bahamas, Cayman Islands and Jamaica, it was the Jamaican-basedÂ  Hatteras 55, Daddy’s Dream, that won Top Boat with two blue marlin.

The all-women team aboard Keepin’ it Jiggy successfully tagged and released the lone blue marlin on the first day. Ten hook-ups, four marlin lost in fight, and many tall tales of large fish being lost were also reported. The sole sailboat fishing, a 45-foot catamaran named Onyva, caught a 37lb sailfish, a rare catch in Jamaican waters. The Onyva team repeated this feat again on the third day to bag the tournament’s Sailfish Trophy.

The bite picked up day two. Six blue marlin were fought, tagged and released and another six were lost in the fight. Luck aboard Daddy’s Dream changed on this day.

“We headed out north about 26 miles offshore to the Henry Holmes Bank and ended up releasing two blue marlin for the day,” DaCosta explains. “The first was around 10am. It was a small one, only about 120lb and a ten-minute fight. The second we caught around 2:30pm. That one was 160 to 170lb and the fight was 15-minutes. We fished both lures and ballyhoo. The marlin we caught were only interested in the lures – purple and black or pink.”

These two blues put Daddy’s Dream in the lead.

The fishing action was temporarily halted for the Lay Day festivities. Forty-one canoes participated in a colorful ‘fishing festival’. This tournament is limited to canoes with single outboard engines and three fisher folk per canoe. This fleet brought in many wahoo, mahi mahi and yellowfin tuna, but no billfish were caught.

On the PAIMT’s third day, DaCosta and his Daddy’s Dream team saw but didn’t catch any blue marlin. Other boats did and this created a five-way tie for first going into the last day. Daddy’s Dream, Motivation, Integrity, Diana and Temptation – in that order based on time – all had released two blue marlin.

Diana, the 2010 PAIMT’s Top Boat, quickly retaliated on that final day with a third marlin in the late afternoon. The estimated 250-pounder was so green it defied several tagging attempts and the leader eventually broke. This fish was disqualified because it wasn’t properly tagged. Use of The Billfish Foundation tags, with photo-confirmation, became mandatory in the PAIMT in 2000.

“I was completely over the edge that last day,” says DaCosta. “The last half hour of the tournament was the longest in my life. We all feared one of the boats with two would get a third and beat us – but they didn’t!”

The blue marlin bite is usually red hot off Jamaica in the fall. In fact last year a 25 boat fleet tagged and released a record 55 blue marlin.

Daddy’s Dream’s win earned them an invite to the 12th Bonnier-IGFA World Championship, now scheduled to be held in Costa Rica, Central America in May 2012.Â  The 49th PAIMT will be held October 20th to 27th 2012.