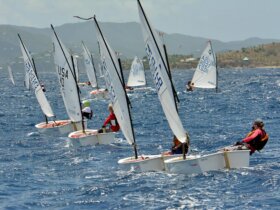 On June 14, the Budget Marine race took place in Curacao for the fifth time. Started by Bas Reintjens and continued by Roeland van Beinen and his Budmar Team, this remarkable race was once again something different.

There was a first downwind start in Spanish Waters, an upwind leg between Caracas Bay and Fuik Bay and a first finish in Fuik Bay, where all participants enjoyed a lunch provided by Budget Marine. So far, so good.

Then the second start was a spectacular anchor start, traditionally a peculiar situation in which all sailors get the chance to show their creativity. Fuik Bay is quite deep, some 15-20 meters (50-65 ft), deeper than some anchor lines. So dragging anchors added to an additional challenge. At four minutes before the start all crew had to go below deck. They are allowed to show their faces again only after the starting signal.

That’s the time they can hoist the sails, lift the anchor and sail away as fast as they can.

The D-Trip crew showed a mathematical solution. They had tied up the anchor line on the stern and brought it to the bow on the outside. Thus they were able to start full sails up along their own anchor which loosened itself at full speed. This inventiveness brought them to the victory!

Eleven boats came to the start. It was a troubled beginning for Ninfa di Awa as well as for Ibis, both having a crewmember in the mast for a last minute repair. Competition was tough at 15 knots winds and flat seas, but the battle was at its best in the downwind leg.