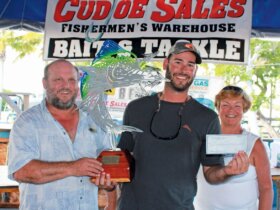 An absolute record of 47 boats participated in the venerable tag & release tournament with participants from the USA, Venezuela, Aruba, Bonaire and Curaçao. All three of the ABC islands had a lucky team on the victory platform–by coincidence, in alphabetical order! Team Driftwood from Aruba took the $10,000 first prize with the catch and release of two Blue Marlin. Le Grand Blue from Bonaire released one big blue and Hey Chama from Curaçao again was among the winners with a smaller Blue Marlin.

Winners of the prizes for best angler, best captain, first releases, surprise catches and the largest Dorado, Wahoo, White Marlin, Sailfish and Tuna can be viewed on the website, www.curacaoyachtclub.com.

New this year was the participation of eight "Junior Anglers" in the big fleet, mostly on their parents’ boats. Fatum Insurances, sponsor of the annual kids’ fishing tournament on the pier, during which 11 youngsters also tried to catch and release the biggest fish, gave the teens between 14 and 17 the opportunity to move up the fishing ladder. It was a big success—winner Jens van der Lubbe, on the Just Us from Curacao, also ended at fourth place in the main event.

Club members of all ages love sport fishing and intensely celebrated this 43rd edition of the tournament from April 3 through 6. Fishing was conducted according to international IGFA “Tag & Release” regulations in the waters around Curaçao and the uninhabited island of Klein (little) Curaçao.

The major prize in the Curaçao Yacht Club 803 Challenge, a brand new Chevrolet Captiva LTZ, is still unclaimed. Next year the challenge will be repeated for the first participant to weigh in a Blue Marlin that beats the then 25-year record of 803 pounds set by fishing legend Robert van Vliet.

The proceeds of the tournament traditionally go to a good cause, this year the youth home "Kinderoorden Brakkeput." A cordial thanks to Eddie de Kort, captain of the Grand Banks Carib Princess for taking me out to sea in the middle of the action.