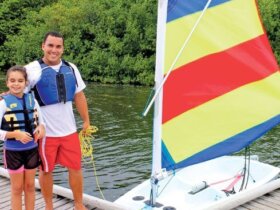 The 23rd edition of the Curacao Regatta had an extra meaning this year. For the first time in this event’s history, the all-volunteer regatta foundation “Friends of the Curacao Regatta” hosted the South-American and Caribbean championship in the Sunfish class.  Due to the fact that qualifications for the PanAm Games could be obtained during this event, the organization welcomed sailors from the Netherlands, Curaçao, Bonaire, Peru, Guatemala, USA, Colombia, Puerto Rico, Dominican Republic, Italy, Bermuda and Ecuador.

Alongside the Sunfish group, the Catamarans and Yachts were also heavily represented. Aside from sailing, a diverse after-sailing program was set up for sailors as well as their supporters.

Sunday, January 21 marked the beginning of the 2007 Curacao Regatta. Ten yachts in three classes came to the start for the pre-Regatta long distance race from Spanish Waters via Fuik Bay to Piscadera Bay and back to Sea Scout headquarters in Spanish Waters, about 18 Nautical Miles. Again, the new Curacao Marine 1010 drew the attention and finished patently obvious first.

On Monday all sailors flocked together at Zanzibar at Jan Thiel beach for registration and the traditional opening in the presence of Prime Minister Emily de Jongh-Elhage. The ceremony was concluded by an enormous fire works show.

According to the Windguru website, strong winds between 15 and 25 knots were expected throughout the week, and that was exactly what happened. In addition, the sea at the south coast of the island showed extremely high waves and unpredictable swells.

The veteran Sunfish sailors, with more body weight than the youngest competitors from the South American countries like Peru, Colombia and Ecuador, were happy with the gale force winds, while the youngsters took advantage of the rare moments that the storm calmed down. At the end it turned out to be a tough battle and the winners were of a mix of ages.

Favored Malcolm Smith from Bermuda took the win after a moderate start and a comeback following his mid week dip. Winning the last two races brought him strait to the capturing of the popular challenge cup. Luis Olcese from Peru realized the sought-for qualification for his country for the PanAm Games later this year in Brazil, by sailing second place, as did the young Gabriel Moran from Ecuador. Moran finished in fourth place right behind the 1991 world champion, Stephen Smeulders, who currently lives in the US but was born in and sailing for the Netherlands Antilles.

In the second weekend, the Regatta organization felt honored with the visit of ISCA (International Sunfish Class Association) president Andres Santana from Santo Domingo. After ample considerations Santana gave his approval for the local Sunfish Association to organize the Sunfish Worlds in the year 2009. The decision firmly added to the gaiety at the prize giving ceremony.

Catamarans
Along with this year’s focus on the Sunfish, the catamarans and yachts also pursued a tough competition. The feathery Nacras, Hobies, Tornados, and Capricorns rocketed on the water, causing spray curtains behind walls of water. In the last race on Sunday morning, the tiny boats sometimes vanished in the waves, and some of them capsized, experiencing big trouble to get back on their slides again. Not only the equipment but also the manpower went down, leaving the cat sailors totally exhausted. The organization’s decision to cancel the very last race was a good one, everyone agreed.

Like last year, the Dutch team Eduard Zanen/Mischa Heemskerk were unmistakably the best, winning all races they participated in.  The amount of participating catamarans is less every time for the last few years, probably caused by the growing Heineken race in Aruba in November. However, the participants this year are a true and dedicated crowd. Some of them, like the German solo cat sailor Eckhard Wittek come back year after year, decades long.

Yachts
In the yacht division, competitive sailing was also to be seen. As in the long distance race on the first Sunday of the Regatta, Curacao Marine 1010 again took all honors in the racing class as well as overall. The young Sea Scouts in the Merlin (2nd) Demarrage (3rd) Chamba II (4th) and Marvin (2nd racing-cruising) had to give way to the more experienced sailors this time. Melody took advantage of the strong winds and ended up in first place. Sol y Mar, also crewed by golden oldies, took third.

In the cruising class, both participants Dauntless and Red Snapper didn’t reach the finish line in the second race and had to skip the third race due to a severe collision. Red Snapper, a small, recently restored cabin boat raced her first competition. After the collision she was forced to send out a mayday to prevent sinking due to a huge hole in the bow. But all is well that ends well. Citizen’s Rescue Organization’s (Citro)  Cornelius Zwaan immediately arrived on the scene of the action. towing Red Snapper to her safe haven in shallow Spanish Waters. Despite this commotion the atmosphere at the prize giving ceremony was excellent. The new Tourism commissioner, Ivan Strick, assisted organizer Willo Perlot in handing out the prizes and the foreign sailors were already making plans for the 24th Curacao Regatta.

Back home they can look back at the event on www.curacaoregatta.com and www.tropicalview.net Both websites show action pictures on the water and gave family and friends who stayed at home an impression of the sunny ambience on the island.  Full results are posted on the regatta site too.

Els Kroon is a Dutch former teacher who now lives and works as a free-lance photojournalist on Curacao.