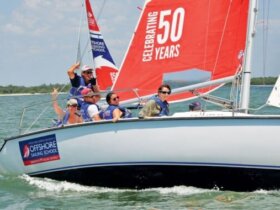 Sail with the Stars

Recently Diego Ravecca from Buenos Aires, Argentina visited Curacao to give a clinic to youth sailors who are traveling to international sailing events. This year, 18 Optimist and Splash sailors, all members of Youth Sailing Curacao, are going to represent the Netherlands Antilles abroad. The Optimist sailors are going to the Scotiabank Regatta in St. Thomas, the Optinam in Mexico, the World Championships in Sardinia, and the Sneekweek in Holland.  Splash sailors Philipine van Aanholt and Dennis van den Berg already took part in the Dutch Youth regatta. With six other Splash sailors, they will also participate in the Worlds in Croatia and the Sneekweek in Holland with more than 200 Splashes at the starting line.

Ravecca has been very successful with young optimist sailors from Argentina and Ecuador. His approach to learning sailing techniques and tactics is different compared to that which most coaches use. He believes that a sailor learns most if he finds solutions himself by creating difficult situations. Ravecca does not explain a lot but tries to tickle the mind of the young sailors. Of course this only works when the sailor has mastered the basic skills and is motivated to learn something new.

Even though the absolute amount of sailors was small (10 in Optimist and eight in the Splash group) he was able to create crowded situations at buoys, so the kids had think about the tactics involved. Besides the training on water of 16 hours weekly, two evenings were spent on theory, rules, and mental aspects of sailing.

Ravecca was pleased and impressed with Curacao’s excellent year-round sailing conditions. He advised the sailors to take more advantage of the nearby sea since most international races are sailed at open sea. The lack of variety in wind conditions in Curacao can be solved to sail in the early mornings when there is less wind or sailing near to the Tafelberg or Kabrietenberg (small mountains) for wind from other directions.

Furthermore he was enthusiastic and surprised about the ability and flexibility of the sailors to learn new skills and to change old, inefficient habits. According to Ravecca boat handling skills, technical aspects of sailing, general physical exercise, and racing tactics in small fields can be well practiced at the island. But the young sailors of Curacao need to travel more to big championships and regattas for sufficient experience with a larger amount of boats at the starting line and the mental preparations for big events.

At the end of the clinic Ravecca was surprised with a party organized by Optimist and Splash parents and was invited to come again to the island for a clinic as preparation for the Curacao Youth Championships in 2008 at the end of this year.