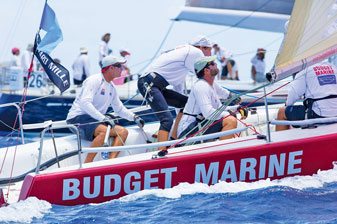 Making a landfall is like having an orgasm – well,
sort of. In that sense, it is a completion of a successful endeavor.

From the
moment you spy that little bump on the horizon, your heart quickens. You forget
the seasickness, the time when you almost got run over by a freighter, all that
work you did to fix something that still doesn’t work and the anxiety
from thinking that your navigation is off and you’ve missed the islands
entirely.

An island
landfall is magical. You search and search, mistaking low-lying dark clouds for
land. When you’ve convinced yourself there’s nothing there, there
is. It’s a delicious feeling, one of accomplishment and relief that 1)
you haven’t sunk and 2) you haven’t hit anything.

We were
completing our first passage from Fort Lauderdale to St. Thomas in December
1967. Navigation by loran was accurate enough to shoot for Virgin Passage west
of St. Thomas. The Virgin Islands were, at first, low, dark gray humps which
gradually resolved into giant stepping stones of dark green mountains cleaved
with olive-brown, near-vertical cliffs. The sight is exhilarating, which
Columbus must have felt when he first saw these island jewels in 1493 and named
them after Saint Ursula and her 11,000 Virgins.

Entering
Charlotte Amalie almost makes you believe you’re in a Mediterranean port
because of the bright red roofs and mostly white buildings. The Danes were
responsible for this color scheme which duplicated the red and white colors of
their flag. Arriving there in the late 60s was vastly different from
today’s busy, crowded port with the large Marriot Hotel to starboard,
monstrous cruise ships at the dock and a crush of buildings in the town.

We tied
to the downtown wharf. Before customs arrived, we hid the cat in a hanging
locker because we had no papers for her. But after the clearance procedure was
almost completed, one officer asked if there were any pets aboard. He must have
seen our hesitation and waited patiently. Reluctantly, I opened the locker and
he peered inside.

Our crew were anxious to get ashore. We stayed for one night,
then anchored in Long Bay near Yacht Haven, a small hotel.
In front was the marina with a plain, one-story building with several offices
and the popular Fearless Freddy’s Bar on a finger pier with two
cement docks. Perhaps a dozen yachts were tied mostly stern-to
and another dozen or so anchored.

That day
Ross Norgrove, a Kiwi who chartered a sixty-five foot
wooden schooner called White Squall
came out, welcomed us warmly, and showed us the ropes – where to go on a
week’s cruise, best places to anchor and snorkel, where to clear in and
out, etc. Now that was a most
generous welcome. Forty-some years later White
Squall is still chartering as a day sail boat out of Roadtown,
Tortola.

Since it
would be advantageous to check out some of the anchorages before taking charter
guests there, we decided to leave the next morning for Christmas Cove near St.
Thomas. Only Rick Parker, one of our crew, remained. He had been an excellent
crew whom we like immediately when he arrived at our slip in Fort Lauderdale on
his old motorcycle. He had a girl friend up north and they wanted to cruise the
world, living on love and coconuts. Deciding that someone had better set this
guy straight, we asked him to join us. A full-blooded Cherokee in his early
forties, Rick had a deeply chiseled stoic face, calm demeanor and fierce
electric-blue eyes.

Rick did
not come up for breakfast in the morning. When Mike started the engines, a
great shriek came from the aft cabin. Shortly afterwards Rick appeared with a
very shy, cute, local girl who politely did not look us in the eye. Rick told
us later that when the engines awakened them, the girl asked where they were
going and Rick nonchalantly replied, “We’re going to Africa to sell
you as a slave!”