The Crazy Reality of Tropical Storm Don in Grenada 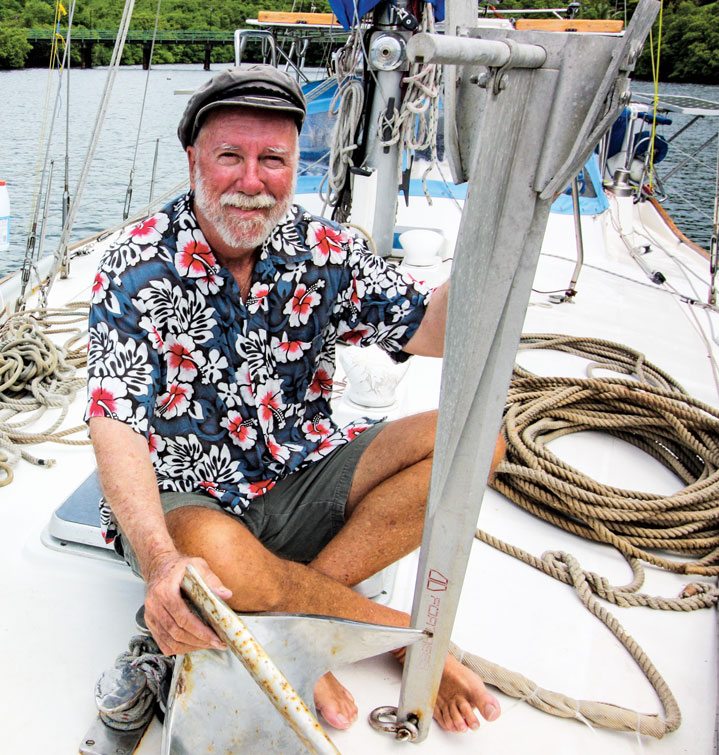 The story of my life can be told through the storms I’ve endured. There are a lot of them over my 57 years of ocean sailing. Caribbean hurricanes are, in particular, my nemeses. Again and again I get my personal life together and am just about to reach maturity and obtain wealth and achieve good dental hygiene—when a hurricane comes along and reduces me to a blubbering, mud-stained idiot.

Twice I’ve had to dog-paddle away from floundering sailboats in 100+ knots—once aboard the 52-foot Alden schooner Elizabeth and then again aboard the ketch Carlotta during Hurricane Hugo in 1989.

For the last twenty years or so, I’ve avoided hurricanes by avoiding the Caribbean while circumnavigating. Easy-peasy! Alas, my wife Carolyn wanted to touch base with our friends on St. John in the USVI and thus I found myself, once again, in hurricane alley.

So, of course, we fled to Camp Grenada for the height of storm season and dropped our hook just south of 12 degrees north latitude.

This is, according to many insurance companies, a couple of feet out of the active hurricane belt.

Carolyn and I just happened to arrive in Grenada on our 47th wedding anniversary. Being the notoriously free spending sugar daddy that I am, I purchased her a SIM card, knowing she likes to keep up with all the consumer items she doesn’t have because she hooked up with me. So she put the SIM card in her barnacle-encrusted, kerosene-powered iPhone—and said, “Oh, dear! Tropical Storm Don is gonna hit Grenada tomorrow!”

Of course, I thought it was a joke—you marry a mentally sick woman, you get mentally sick jokes, right? So I flipped on my SSB radio and listened to my buddy Chris Parker who confirmed TS Don and added, “… could be winds clocking 360 degrees at up to 50, 60, 70 knots.”

Damn! I immediately realized I had to get proactive; so I peed in fear, pooped in dread, and puked in nervousness—the Three Ps of Hurricane Prep, as I call them.

Frantically, we dashed to nearby Egmont harbour in hope there would be enough space left to wedge ourselves in. We found, instead, an almost deserted hurricane hole four miles away from thousands of blissfully exposed vessels.

“Let’s S&M our beloved Ganesh,” I barked to my wife, who immediately began lashing stuff, tying stuff up, and whipping the ends of our Irish pennants.

“Strip off her headsails,” I screamed. “Punch up the weather report! Strap down the spin poles! Slap on some chafing gear.”

As my wife worked on the boat, I randomly tossed over salvaged anchors like confetti. I carry 1200 feet of rode for just such an occasion. Soon my vessel had more gear down than the spectator fleet at the America’s Cup.

Anchored off our starboard side was a luxury cattlemaran. At first I thought it was a charter boat with BOB passengers (Brats On Board) but it turned out to be a private yacht from Canada with four kids. Well, that’s what their parents claimed, but I think there were 12 or 16 kids aboard, with only four of them allowed on deck at any one time.

How else could they manage to scream and cry so loud 24/7?

Unfortunately at least one of these kids could read. His all-time favorite story in All At Sea was about me taking my plastic sword wielding grandkids in the dinghy to chase freighters while screaming, “We want candy!”

“Is that story really real?” he asked.

Soon all the boat kids in the harbor were going boat-to-boat while waving stick-swords, yelling, “ Arrrrgh, matey!” and extorting sweets while explaining, “Fatty Goodlander put us up to it!

… not true—well, not entirely true!

Worse, their mother approached Ganesh in a dinghy on our starboard side with a notepad and pitifully pleaded, “… teach me everything you’ve learned about writing in the last 40 plus years within the next four minutes—and speak slowly so I can take notes.”

On the port side of Ganesh was, alas, another rail-clinger—the owner of a nearby CT37. He claimed to be a ‘big fan’ and said that back in the ’70s we once drank a beer on the same Caribbean beach.

“I remember you,” I said with a sincere smile, “We were drunk. I was skinnier. We both had beards. And hair. And I brought my guitar …”

Boy, some guys are easy.

Then, out of the clear blue sky, he suddenly snarled, “Mold!”

“Mold,” he chanted, “It’s war, you know—between the different types of mold. We have inter-bilge muffin fans to circulate fresh air. I’m from Alaska—we know mold! It’s a titanic fight for moisture, Fatty—understand mold and you’ve understood the world!”

“Interesting,” I said, wondering if the current political situation in American had driven all its citizens nuts or just this particular one. “But excuse me for a moment—I have to help the lady on my starboard side attempt to put me out of a job.”

“There are three parts to a story,” I told the woman as she scribbled in her notebook, “The beginning, the end, and the muddle.”

“How many parts,” she asked, tossing up her hands in frustration.

Oh, this wasn’t going to be easy.

Now here is the truth—I pretty-much hate people—especially people who are nice to me. However, in some of my trashier marine stories, I sort of pretend to be a nice guy—silly but true. Thus I’m loath to allow the general public to know what a b*****d I am. So I occasionally struggle—to appear, at least—to be an okay human being.

This is a task I’m wholly unsuited for.

By this point, the mildew-obsessed guy to port was screaming, “… active mold spores are in the labels of the cans in your bilge, Fatty! Do you have any printed materials aboard? Why, fresh printer’s ink is a perfect medium for mold!”

Just when I was about to tell ‘em both to screw off, the potential-lady-inkslinger suddenly said to me, “Ice cream! Free ice cream! And Mister Mold can come too!”

Why, dear god, is my watery life filled with such goofy people? Do I attract weirdoes or make them so? When they empty marine insane asylums—why do they always do it in my harbor?

Nonetheless Carolyn and I trooped off to the cattlemaran for homemade ice cream.

“Free is the one thing we can afford at Fatty’s pay scale,” Carolyn said truthfully.

The kids were great and obviously hyperactive. One was having his foot amputated in the main cabin, another was smearing around the resulting blood—while a young blond girl patiently waited, waited, and waited until the huge popcorn bowl was filled-to-brimming, and then punched the side of it sharply with the palm of her pretty little hand.

… popcorn everywhere! Popcorn on the spreaders, in the dinghies; one long-distance kernel made it two boats over and deep into the mangroves.

Yes, I find these feeble pre-hurricane social interactions exhausting. I mean—how many times can I make my wife Carolyn burst into tears in public before it stops being fun?

In any event, I eventually grew tired. We returned to Ganesh at dusk and slept right through TS Don without waking—which, when you come right down to it, turned out to be a highly successful storm strategy.

Editor’s note: Fatty and Carolyn are currently attempting to ‘reason with hurricane season’ in Grenada.