ALL AT SEAThe Caribbean\'s Waterfront Community
HomeLifeAre the Coral Reefs in Trouble?
Life

Are the Coral Reefs in Trouble? 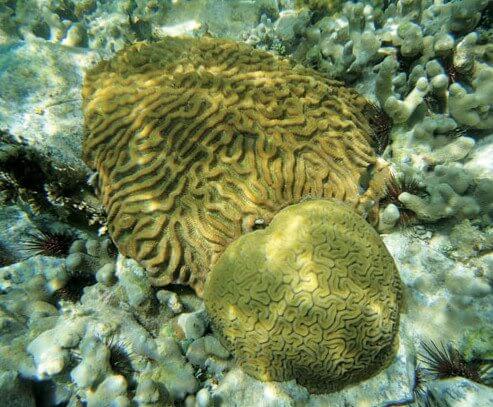 After: This is the same coral that has recovered from bleaching – coral can recover from bleaching events if they are not severe and prolonged. Photo: Adam Glahn

You might have heard the rumor that coral reefs are disappearing. I wish I could say it is just a bad rumor with no substantiation, but good science points otherwise. The reasons for global coral reef decline are complex, so let’s start with a basic primer on corals and then take a look at an area that has a long monitoring history.

Coral are animals that have a simple anatomy consisting of a cup shaped body with a central opening that is ringed by tentacles. The entire coral contains stinging cells called nematocysts and the whole thing is called a polyp. Corals can be divided into two main types: hard and soft corals. Most corals have single-celled algae called zooxanthellae that live within the coral tissue. The coral and zooxanthellae enjoy a symbiotic relationship. Zooxanthellae ‘fix’ large amounts of carbon and sugars through photosynthesis, some of which are passed onto the coral. These chemicals are used for metabolic functions and to help the coral synthesize calcium carbonate for their skeleton. Zooxanthellae also give coral their colors. The coral in return provides protection as well as a nutrient rich environment for algae growth. The relationship with the zooxanthellae is vital to the survival of the coral. Coral reefs cannot exist the way we see them today without this relationship with the zooxanthellae. Although most of the coral’s energy comes from the zooxanthellae, corals do use their tentacles to feed upon plankton but mostly at night, when plankton is more abundant.

To better understand the decline of coral in the Virgin Islands National Park I spoke with Jeff Miller, a marine scientist with the National Park Service (NPS). Miller told me about a catastrophic coral die-off that began in 2005. During the summer of 2005 the reef-depth water temperatures at the study sites at St. John and at Buck Island, St. Croix, hit a record high, peaking in September. During that time, over 90% of the coral surveyed began bleaching. One degree above the summer maximum is enough to trigger coral bleaching.

When the coral is stressed (anomalies of temperature, salinity or increases in sedimentation or pollution) it can expel or digest the Zooxanthellae, causing the coral to turn white in a process called coral bleaching (recall the Zooxanthellae give the coral their color). As seawater temperatures have warmed, thermal induced bleaching has become more common, and while bleached corals are alive, prolonged bleaching can weaken corals, causing eventual mortality from energy deprivation or disease. The 20 years of NPS monitoring data has shown an increase in reef depth water temperature at study sites around the Virgin Island National Park.

Coral can recover from bleaching events if they are not severe and prolonged. But bleaching events like in the northeast Caribbean in 2005 and the Southern Caribbean in 2010, with temperatures much warmer than normal for over a month, are often followed by outbreaks of coral disease. In the Virgin Islands, coral cover declined by over 60% following the 2005 bleaching and disease event. These losses reinforce that every living coral in the Caribbean is important and just a few degrees increase of sea temperature can have a profound effect upon coral reefs worldwide.

Coral reefs are so much more than pretty structures in the sea where colorful fish hang out. Many fish are spawned and fed in waters surrounding reefs. Coral reefs are home to more than one million diverse aquatic species, including thousands of fish species. These fish hold up the bottom of the food chain of the sea and may hold cures for medical maladies in humans. Losing reefs means losing those cures. Healthy seas and coral reefs generate billions of dollars through tourism and millions from commercial fishing. Coral reefs buffer our shorelines, but can only do that when the reefs are alive. Dead reefs crumble during storms and provide no protection for adjacent land, and fish go elsewhere. Ecosystems such as mangroves, which are the nurseries for many fish and other sea life, would be in jeopardy.

WHAT YOU CAN DO:
Don’t anchor in areas with coral – this includes sand patches with small coral heads that might be in the way of the movement of you chain or rode.

Don’t touch or step on coral when you are snorkeling or diving. Watch your fins and don’t kick sand on the coral. Fasten your equipment and gauges so they don’t drag on the reef.

In sensitive areas, use your holding tank and avoid cleaning the bottom of your boat which activates the antifouling paint and is toxic to fish and other sea life.

Devi Sharp is a retired wildlife biologist currently exploring the Caribbean with her husband, Hunter, on their sailboat Arctic Tern.

Jeff Miller is a fisheries biologist with the National Park Service, Inventory and Monitoring Program stationed in St. John, USVI. He is monitoring the effects of rising sea temperatures on coral.

Caroline Rogers is a Marine Ecologist with the USGS Caribbean Field Station in St. John, USVI, and has been conducting research and taking photos in the Virgin Islands since 1984.

Devi_Sharp
Devi Sharp is a retired wildlife biologist and exploring the Caribbean with her husband, Hunter, on their sailboat Arctic Tern.
RELATED ARTICLES
Life