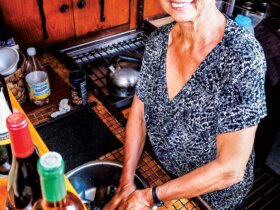 Being a boater, whether under power or sail, requires situational awareness. Knowing what to expect from the tides, currents and weather when out on the water can make the difference between a relaxing cruise and a harrowing experience. Tides and currents can be accurately predicted from tables provided by government agencies that have compiled data over many years. Weather forecasting, on the other hand, can be a bit more problematic. Therefore, it is important that the prudent mariner has the skill to predict the weather for their vessel on a short-term basis (12 to 36 hours ahead) by observing the sky.

In the northern hemisphere the wind band known as the Prevailing Westerlies, between 60 degrees and 30 degrees north latitude, is where most boaters sail throughout the year. The wind blows across the continents and oceans from west to east within its boundaries. Following this same path around the globe are a train of low and high barometric pressure systems. The low-pressure systems, also called mid-latitude depressions, develop into warm and cold fronts. These frontal systems are what most sailors call weather as they pass overhead of their vessels. Weather is defined as the state of the atmosphere with respect to heat or cold, wetness or dryness, calm or storm, clearness or cloudiness. Using cloud identification and a rule of thumb, called Buys Ballot’s Law, every sailor can confidently predict the frontal weather approaching their yacht.

In the northern hemisphere, wind circulates around the center of a low-pressure system in a counterclockwise or cyclonic direction. In 1858, the Dutch meteorologist Christophorus Buys Ballot formulated a law for predicting the location of the center of a low-pressure system north of the equator. Simply stated, “with your back to the wind, low pressure is to the left, higher pressure to the right.” With this knowledge, a skipper can predict if the center of the low will pass to the north, south or directly over their boat, as the depression moves generally from west to east.

A fully developed mid-latitude depression has a leading warm front followed by a cold front both radiating in a southerly direction from the center of the low (see diagram).

As a warm front advances, it slides up the cooler air mass in front of it. At this boundary layer clouds and precipitation form. The sequence of clouds observed, over a period of about 24 to 36 hours prior to the warm front arriving, are cirrus, cirrostratus, altostratus and nimbostratus. This lowering cloud deck eventually brings steady rain and overcast skies.

Cirrus clouds are high altitude, wispy clouds that are also known as ‘mares’ tails’. They are the first sign that the approaching warm front boundary is about 600 nautical miles away. Cirrostratus clouds are lower in altitude than cirrus and contain ice crystals. The sun when seen through the thin layer of cirrostratus will produce a visible halo that will portend rain as the warm front continues closer. Altostratus clouds are lower still and made up of water droplets. These clouds appear to be grayish layers that diffuse the sun as it tries to shine through, and scattered showers may begin. Nimbostratus, are the lowest level of clouds that pass overhead as the warm front arrives bearing steady rain and dark gray fully overcast skies.

The cold front that follows the warm sector of the low-pressure system bulges into the warmer air with a cooler and denser air mass. This causes vertical air movement and updrafts that develop into towering clouds.  This frontal boundary layer is quite different than the layered clouds that characterize a warm front boundary.

The approaching cold front’s signatures are cumulonimbus clouds, which lead with squall lines and are embedded with thunderstorms and produce high winds and downpours. These are dangerous conditions for boaters, sailors generally heave-to, while power boaters will use storm tactics that will keep sufficient headway and directional stability to avoid broaching. Once the cold front has passed, strong gusty cooler winds will follow and so will puffy cumulus clouds leading to the fair weather of the following high-pressure system.

Since the winds of the mid-latitude depression circulate counterclockwise and align slightly inward toward the center of the low; as the warm front, then the warm sector and finally the cold front pass over a vessel the wind will veer in direction from southeasterly to southwesterly to northwesterly.

Capt. Jeff Werner has been part of the yachting industry for over 25 years. In addition to working as a captain on private and charter yachts, both sail and power, he is a certified instructor for the RYA, MCA, USCG and US Sailing. He also owns Diesel Doctor (MyDieselDoctor.com).

Tags: How To weather forecasting