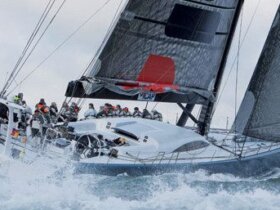 At the 2009 Grenada Round-the-Island Race (GRIR), the trimaran Horizon Region Guadeloupe shattered the race course record, slashing more than an hour off the previous record by crossing the finish line with an elapsed time of 3 hours, 54 minutes and 2 seconds. This new sailing record raises the bar of competition for the 2010 GRIR and poses an exciting challenge for boats everywhere. As such, the Grenada South Coast Yacht Club has responded by creating a prestigious prize for any vessel that breaks the record, upping the stakes for the 2010 GRIR.

“The bar has been raised,” pronounced Danny Donelan of Port Louis Marina, who was on board the Horizon Region Guadeloupe during the 2009 race. “It will be interesting to see if there is any yacht out there that can beat this new record. [The 2010 GRIR] should be an interesting and really fast one. Anyone up for the challenge?”

In addition to top quality sailing competition, the event will bring a wide range of entertainment to the shores of Grenada’s spectacular Grand Anse Beach. High points of the weekend will include A Taste of Grenada food festival, the youth sailing exhibition, the ever-popular and quirky Crazy Craft Bathtub Derby, and more events to be announced. The Grenada South Coast Yacht Club and 2010 Race Committee are working to continue the GRIR’s tradition of promoting sailing excellence while also providing an exciting lineup of events that celebrate Grenadian culture.

The pinnacle of the race weekend, however, will undoubtedly be the post-race party where the awards ceremony will reveal if any yachts were able to successfully take a crack at the course record. With bragging rights on the table, the 2010 GRIR promises to be one of the most exciting sailing events of 2010.