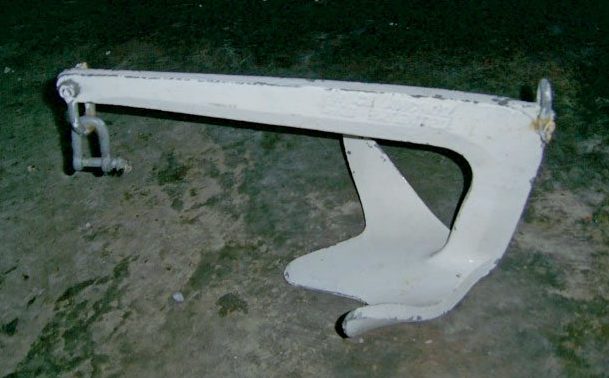 Do you Know the Difference Between Anchor Designs?

The saying ‘big things come in small packages’ certainly describes Carriacou’s sail loft, cleverly known as In Stitches. It’s a three-person show, owned and operated by Andy Smelt, which can make or repair pretty much any sail that blows into Tyrell Bay.

Smelt is a well seasoned sail maker but those multi faceted skills were acquired after some amazing adventures, first as a treasure hunter and later as a pirate. Arrr.

The hunt began in the late 1970s after crossing the pond from the UK on his Wharram catamaran. After a few island stops, and a wild sail past a spitting volcano, Smelt landed in Antigua. Like all good cruising sailors, he needed money to support the habit so he signed on with a treasure seeking, converted mine sweeper bound for the Dominican Republic. The booty they eventually found was three tons of silver from the wreck of the Nuestro de la Conception and somewhere in the middle of that adventure he was hired to play a movie pirate with Michael Caine in The Island.

A string of more earthly jobs followed: as delivery crew; a yacht captain; and helping to start Antigua’s Crab’s Marine. “That was good fun,” he said, “I met Don Street then, great times those were.”

In 1994 Smelt sailed to St. Barth where he joined a friend’s sewing shop. “That’s where I learned to make sails,” he explained. Since St. Barth doesn’t boast a secure hurricane hole, he sailed south each summer, sometimes to Trinidad, until in 1999 the boat was wrecked off Barbuda.

No problem for a retired pirate; he quickly found his current vessel, Yellow Bird, at Crab’s Marine. He used to race her there, winning every event he put his keel into. “It looks like a shoebox,” he joked, “but she sails like a witch.”

It was during those trips south that he kept bumping into sleepy Carriacou and liked what he found there, or perhaps it was all that wasn’t there that he enjoyed the most. No jumbo hotels, cruise ships rarely visited, and the island was lacking a sail loft. His partner, who loved the higher RPM of St. Barth, was dubious. “I told her it was perfect, it had everything; lots of international boats; good music, nice people.”

She fell for it and in 2001 they made the move, sewing machines and all.

Working from the boat was not an option, so they hooked up with Jerry at Tyrell Bay Haul Out who helped secure a place that had potential. That wooden structure, which sits on the main thoroughfare of Harvey Vale, was adjoined conveniently to the bar next door. It had been a community center but when Smelt took up residence, it was an empty shell with a pool table. All around the big square room, closed shutters held drawings and paintings by the legendary sailor Paul Johnson. Beautiful scenes of boats in the bay and bars on the beach, each one lending a perfect air of ‘art gallery’ to In Stitches.

I had assumed that if someone needed a sail made or repaired they would seek out one of the big lofts, but not so; the Carriacou loft is busy all year. In the winter they get a lot of boats coming over from the ARC or down for one of the Southern Caribbean races.  Cruisers, who constantly stream in and out of the anchorage, always need a stitch or two and bring even more business during the summer.

Then there are the boats from Petite Martinique and Carriacou itself. “We do all the racing sails for the local boys,” said Smelt. “That’s good fun. It’s a shared responsibility to design good sails, ’cause they’ve got to win. They love to come in the day before regatta and have their sails done.” Usually the local sailors cut the cloth and Andy and crew drive the machines.

In Stitches is not a large loft but crammed in that space are half a dozen machines, cloth, cushions, fittings, zippers and piles of projects that are coming and going. “We don’t handle high tech sails, but we did a repair on a sail from a 50-foot cat the other day.  Took four guys to lift it.”

One member of his team does fine canvas and cushions. “She loves it,” he exclaimed, pointing out bolts of colorful canvas and upholstery fabric.

Hopefully the future holds a storm proof building for In Stitches because when a strorm threatens everything must be moved to a concrete bunker. One hurricane yanked up the roof, messing up the place until all the needles were lost in the haystack. A tougher structure would also be a handy place to keep Smelt’s island ride, an antique BMW motorcycle and sidecar.

Sailor, writer, teacher Jan Hein tacks between the Caribbean and Washington’s Puget Sound with a boat and a life on both ends.