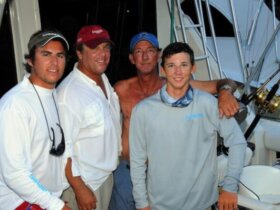 The warm tropical hospitality of the Dominican Republic really seems to suit one North Carolina sportfisher. Builder’s Choice, a 64 Jarrett Bay based in New Bern, took top honors at the third annual Marina Casa de Campo Open last week at the luxurious resort in La Romana, DR. This marks the second year in a row that the boat has finished atop the Open leaderboard, which is co-sponsored by the marina and Fly Zone Fishing.

Led by Capt. Brent Gaskill, Builder’s Choice released five blue marlin the first day of fishing and added two more the next. Cabana, a 64 Spencer run by Capt. Eddie Wheeler, claimed second place with a two/one split of blues. Auspicious, an 80 Viking with Capt. Cookie Murray at the helm, made a last-day charge by releasing three blue marlin within a 45-minute span. Ties are broken by the time of release.

Blue marlin count for 400 points in the Open’s all-release format. White and hatchet marlin, plus spearfish, score 100 points while sailfish are worth 50. There are no line class rules in this event, but boats are limited to six rods. Lures and baits are both allowed, with ballyhoo the most common offering in the spreads.

“This is a full-fledged boat tourney,” explains Tournament Director Robert “Fly” Navarro. “The teams just go out, have fun and catch fish. We’ve gotten positive feedback on the simplicity of our rules.
“We co-host with Marina Casa de Campo to showcase the facility and celebrate these visiting boats spending time in the region,” he adds. “It’s a world-class resort and the fishing isn’t too bad, either. The marina and Casa de Campo take care of the hospitality aspects and event details while we run the tournament. We had live updates on social media throughout the tournament.”
Lainey Jones, competing aboard Mama Who, a 77 Jarrett Bay, was named the top lady angler for 2019. Jones tallied 800 points for two blue marlin released.
The dates for next year’s Marina Casa de Campo Open are set for March 14-16, 2020. For more information on registration and dockage, please visit flyzonefishing.com
Tags: Blue Marlin Casa de Campo Marina Jarrett Bay Boatworks