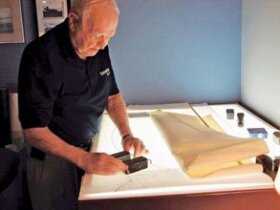 Did you know that pelicans go blind from the trauma their eyes sustain when diving for food? Then, being unable to hunt, they die of starvation. Several readers recently approached me with this bit of (mis)information; a result of the periodic resurfacing of an unfounded myth postulated by ill-informed eco tour guides. Unfortunately, while doing research for this article I also found the same misinformation repeated on alleged “educational” websites.

Brown Pelicans, the smallest of all pelican species, weigh approximately 8 pounds with wingspans of almost 7 feet, and live up to 40 years. A Brown that was tagged in 1931 in Florida was found again, healthy and doing well, in 1964.

Pelicans use their acute eyesight to find food, consisting mainly of small bait fish; however, while the Browns dive from heights as much as 60 feet above the surface, other species paddle along the surface scooping food as they go.

The pelicans’ throat pouch, the gular pouch, can hold 3 gallons of water and fish. Observing feeding pelicans we note that once the gular pouch is full the pelican tips his head back, pointing his beak toward the sky. As he tilts his head, openings at the back of his beak drain the water away, leaving only fish. He then turns the fish in order to swallow them head first, preventing the fins from catching in his throat. Active wild pelicans consume up to 4 pounds of baitfish per day. Hatchlings are fed for the first 9 weeks and can consume up to 150 pounds during that time.

The pelican is a species that has survived for 40 million years, virtually unchanged. How could a successful species like the pelican be blinded and die from starvation by the mere act of feeding? It isn’t so! Are there blind Brown Pelicans? Yes, but the blindness is not caused by diving for their food. The Brown Pelican’s body is filled with air sacs just under the surface of the skin and these sacs cushion the force of impact when it hits the water.

What does cause blindness and other injuries to pelicans? Man, and the pollution caused by man. Because pelicans live their lives along our coasts, rarely venturing more than 20 miles from shore in their search for bait fish, they are particularly susceptible to the chemical pollution and sewage washing into the seas today. Chemicals can burn their eyes while sewage causes infections.

Avian botulism, caused by eating diseased fish found in “dead” water (overly warm water devoid of oxygen), wrecks havoc on water bird populations, killing up to 50,000 per year. Not only does the botulism cause blindness, it can also bring about paralysis so severe that the pelicans cannot hold their heads up and thus drown.

Pelican rehabilitation facility statistics in Florida show that 90% of pelicans under care suffer from injuries sustained by entanglement in fishing lines, nets, and hooks. Experts believe that at some point in a pelican’s life, 80% will become entangled either in an active line or in discarded line thrown thoughtlessly into the sea.

Little was sadder than the dead pelican I saw hanging from a tree branch after loosing the fight to free itself. The line had cut through the flesh on his webbed feet, it had cut through wing tissue, and it had pulled his beak open in a monstrous gap. He had hung there, bound and trapped, for many days before he died simply because man had been too lazy to discard his line properly.

Visit Part II of this series on Brown Pelicans or a cruiser’s tale of The Brown Pelican’s Mouth can Hold More than its Belly!

Karl James, a two-time Olympian in the Laser Class who started sailing in Antigua at the age of 12, is the new President of the ABSA

How to Maximize Mooring Multiple Vessels at a Single Point

What’s the latest way to maximize mooring multiple vessels at a single point, while minimizing the dredging linked to the wind and current? 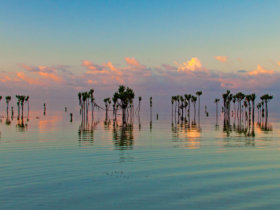 The Bahamas Petroleum Company’s offshore oil exploration project has downplayed the threat of an oil spill to Florida, Cuba and The Bahamas

Sargassum Weed – Scientists Research Turning it From Trash to Treasure

The masses of sargassum weed, got so bad that in 2018 there was a swath covering over 5,000 miles of ocean from the central Atlantic to the Caribbean and from West Africa to the Gulf of Mexico