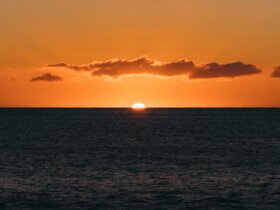 Is the Green Flash Fact or Fiction

Enigmatic and colourful, Brian Talma is no shrinking violet when it comes to promoting his beloved Barbados and water sports.

With a call to arms of ‘ACTION!’ hollered at any available opportunity, Brian’s enthusiasm and warm personality instantly rubs off.

A former professional windsurfer, with numerous trophies under his belt, Brian now spends most of his time promoting his Beach Culture Lifestyle.

When asked what attracted him to the ocean, Brian gives the credit to his dad.

“I was introduced to water sports by my father. Some of my earliest memories were of me on his back, catching waves. I was about six or seven at that time and it wasn’t long after that I started body surfing.”

Brian lived on the hill that overlooks the now well recognised Bajan surf breaks of Freights and South Point. It was here that he honed his surfing skills, before surfing in Barbados was cool.

Without the influence of his dad, Brian says he would not have found his true calling and his life could have followed a different path.

Nowadays Brian is one of the leading promoters of Caribbean water sports. In an age when the term ‘waterman’ is banded around wantonly, Brian is the real deal – practicing a host of different disciplines at a world class level.

When asked which sport he would choose if it could only be one, he replies: “It would be windsurfing because it has allowed me to live this life, make a living, given me fantastic memories, allowed me to travel and connected me with some fabulous people – many of whom I now call friends.

“Windsurfing gives me the freedom I crave and the ability to express myself in the waves. I love windsurfing at the Action Beach, Silver Sands … Action!”

As a world class ocean athlete, Brian was expected to compete from almost the very start of his career. This wasn’t a problem for the Irie Man, as there is a fierce competitive streak that runs through his Bajan veins.

“I turned pro in ’89 and competed on the Pro Windsurfing Tour until ’04. From 2000 to ’03 I was also on the Artificial Wave Tour, which banded together a whole host of top action sports athletes including multiple world surfing champion Kelly Slater and skateboarding mega star Tony Hawk.

“After learning to SUP, I started competing in this discipline. I did all the early world cup events, some of the Waterman League competitions and generally helped to promote the sport throughout Europe.

“There is so much water in the world and SUP is the perfect sport to make use of all of it!

When asked if he misses the hectic travel schedule he used to endure, he answers: “I loved the tour but life changes. I was away travelling for many years. I saw people come and go. You cannot do it forever.”

These days Brian’s focus is his Beach Culture World Tour where he promotes the way of the waterman and beach lifestyle. This includes all the water sports mentioned but also music and art – the whole package.

“I started my Beach Culture Tour in 2002 and so far it’s been amazingly successful. Back in the days of competing on the PWA I had to organise everything myself. Now it all gets done for me! I don’t have to compete for money. I get paid to do what I love and get given a platform to promote this fantastic way of life.”

Brian is passionate about his homeland – Barbados. As much as he enjoys seeking out new places to indulge in his passions, he always loves to come back to what he knows best – home. It’s a place where he feels he belongs. All his family are here and perfect conditions for his sports are everywhere.

Brian sums up his home, his life and everything he has achieved in one word – “ACTION!”