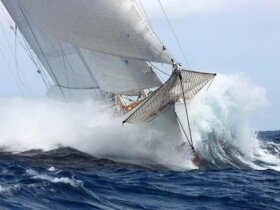 It all started with a bar bet—and the International Sailing Regatta of Bonaire celebrates its 40th year October 7 to 13, 2007 with traditional races around Bonaire and Klein Bonaire.

The first “regatta” recorded on Bonaire took place on Sunday, September 8, 1968 between two fishing sloops designed and constructed on Bonaire. The skipper of the Vella was Hubert “Ibo” Domacassé, born on Bonaire, and the skipper of the Sislin was Don Stewart, who arrived on the island with his schooner from California in 1962 and never left.

The plan for the race, clockwise around Bonaire’s satellite island of Klein Bonaire, was hatched the first week of September 1968 in the bar of the Flamingo Beach Club, (now the Divi Flamingo Beach Hotel & Casino), as a result of a bet among regulars.  The challenge:  choose a winner, at the expense of some boxes of beer, of a race between the Velia and the Sislin.  Each boat would carry four persons, with start and arrival at the Flamingo Beach Club.  (Don Stewart, known as Captain Don, was then manager of this club and Ibo Domacassé a bartender.)

Supporters gathered near the jetty of the Club at 9 a.m. when the departure signal was given by exploding a small piece of dynamite.  The Velia carried a blue and black colored flag with the initials Z­S (Zink­Smith, a sponsor) and looked like a pirate vessel. The winner was the boat that arrived first at the arrival buoy near the Club—and it was Ibo and his crew on the Velia, just three minutes before Captain Don arrived on the Sislin.

Word got around fast and the second edition in 1969 grew to more than 70 boats, from neighboring islands as well as Bonaire itself.  By 1974, Sailing magazine was reporting on the event:   “Every fall the island’s residents, some 8,260 inhabitants, put on a colorful festival consisting of daily sailboat races, a sail around the island, beach barbecues and dances to steel drums and a parade. For four days the sailing fishing fleet and a fleet of offshore yachts from neighboring Curacao and Aruba, Venezuela, Puerto Rico and as far as the US mainland race in the delightful balmy winds. Steel bands set up camp on the beach where island children, dismissed from school for a week for this high point of the year, frolic in a carefree atmosphere.”

For the 40th anniversary, daily races in various classes will be held during the day, as always, with a variety of surrounding events currently in the planning stages.  And in the evenings?  The festival on the boulevard and in the streets of Kralendijk will keep going every night for an entire week from Karel’s Beach Bar, City Café to the Wilhelmina Park, with a variety of stands with food, souvenirs, games, shirts, bars, local and International live music and shows—even after-midnight parties.