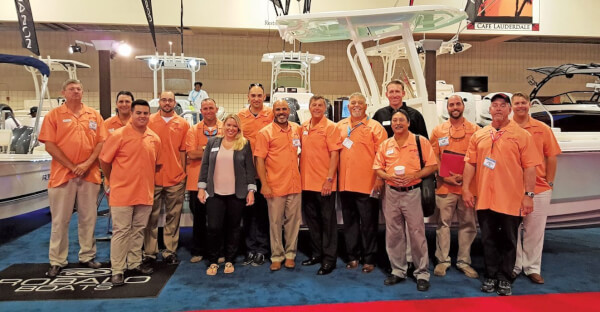 The 90th anniversary celebration of Bob Hewes Boats is more than the story of a four-generation family business. Instead, it chronicles the history of the South Florida boating industry through the achievements of a North Miami, Florida-based enterprising dynasty that today operates one of the country’s largest boat retailers.

“My great-grandfather, Lewis ‘Lew’ Hewes, was a pioneer in the marine industry in South Florida, opening a marine dealership in 1926 on the Miami River,” tells Krissy Wiborg, who today runs the dealership with her father, Jim Wiborg and brother Brian.

Lew Hewes sat on the board and assisted in the first Miami Boat Show back in 1941, and Bob Hewes Boats has been displaying at the show ever since. Lew was also one of three founding members of the Miami Outboard Club in 1938.

In the 1950’s, Lew’s son Bob took over the family business and in 1962 began manufacturing the first production flats boats out of fiberglass: the Hewes Bonefisher. Bob was also the first to introduce trim tabs to flats boats, and with the help from several legendary fishermen, the first to design and introduce the poling platform.

Bob sold the manufacturing rights to Maverick Boat Company in 1989 and the dealership to his son-in-law and daughter, Jim and Lorrie Wiborg in 1988. Today, Bob Hewes Boats has grown to four locations in North Miami and Pompano Beach.

“My great-grandfather Lew would be amazed at how things have changed and technology has progressed. For example, what used to be done with pen and paper is now done on computers with various programs. There are new processes and materials used in today’s designs. The way we run the business has changed too and so has the products we sell. My brother and I look forward to continually growing the business and keeping the family legacy alive,” says Wiborg.