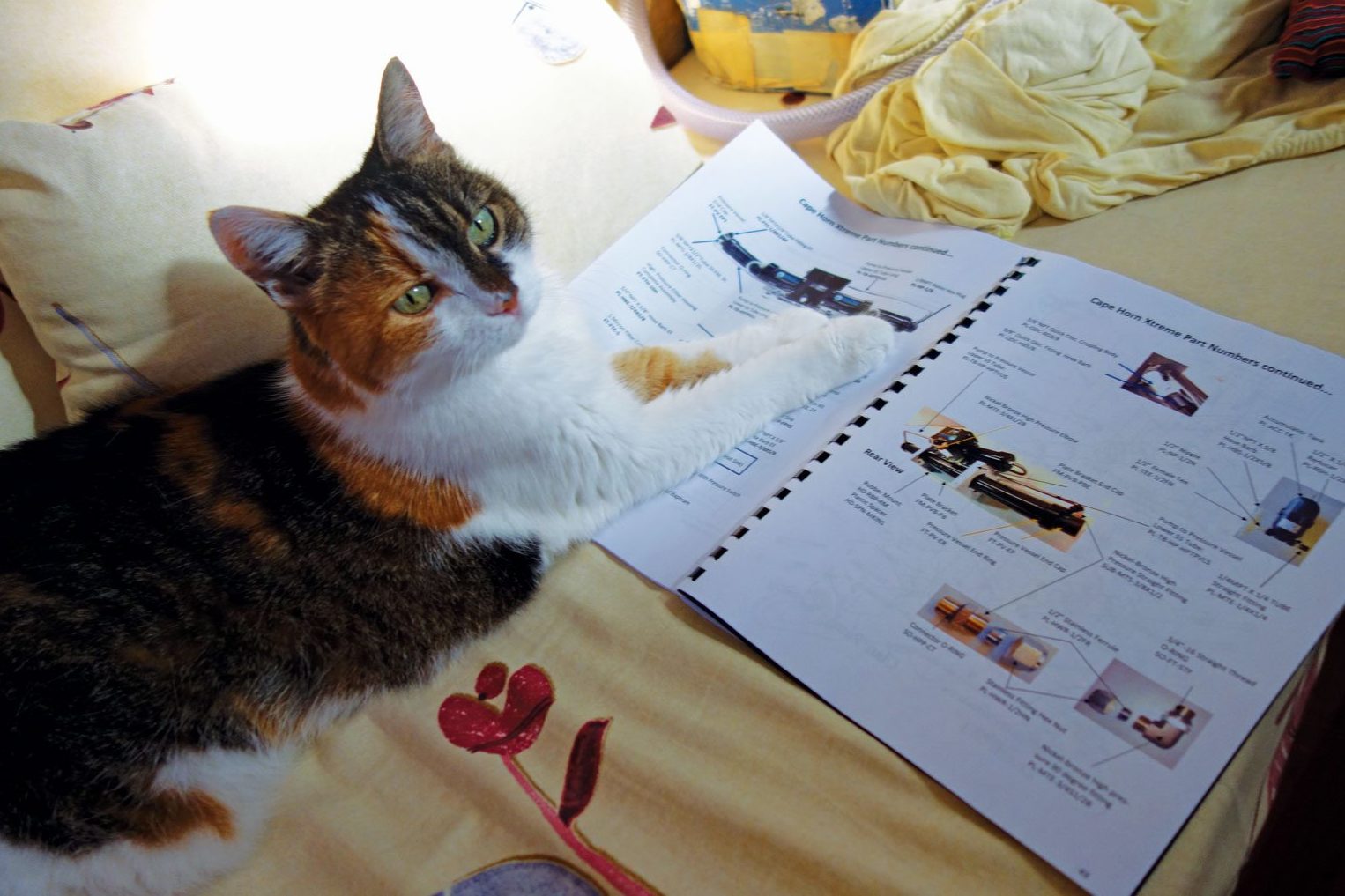 Water Maker on a Small Boat: It Can’t be Modular Enough!

One beautiful Indian Summer day, she came home from work and stated, “We need an Exit Strategy.”

“Well, we’ve had a lot of Happy Times, but I feel like we’re Just Drifting. I’m ready for more.”

He looked startled. “This is something of a surprise, what’s your Motivator?”

“I don’t know. It was a rough day at work. We took care of yesterday’s snafu but there was No Justice in the solution. Don’t get me wrong. There’s no Flying Buzzard over my head. I can keep working there as long as I want. I’m just ready for our Next Chapter. Aren’t you?”

“Well …” he replied. “I’m willing to talk about it, as long as the plan means this would be our last winter. Last year was brutal. So much snow. Remember that tree at the corner?”

“Oh yeah. It was great for giving directions to our holiday party: Turn left at the One White Tree.”

He shivered. “Would you like a drink?” he asked as he got out the martini glasses. “One Olive or two?”

She hummed a Song from Three Penny Opera while she put together a platter of cheese and crackers. He decided to see just how far she was willing to go. “Let’s brainstorm. We could tour the world’s museums and see all of the great Impressionists.”

Her eyes narrowed, knowing he’d fall asleep in every museum. “Lovely thought,” she replied. “We’re Knot Yet ready for the slow lane. Let’s save it for when we’re too old to do something more challenging.”

“Aha!” His eyes gleamed. “I’ll buy you a pair of Silver Heels, and we’ll learn to dance the Tango, and Calypso, and the Merengue.” He stamped his feet, threw up his hands and clapped in a Latin rhythm.

“Hmm.” She joined him in the dance, imagining herself High Heeled, dressed in black and red. “That would make for a Fine Romance, but I’m not sure – it may just be Too Much Fun.”

She veered back to the topic. “Do you have any other ideas? What do you Dream of doing?

He relaxed and remembered a short-lived dream of his youth. “We could renounce our possessions and study Zen.”

“The Tao to our retirement Destiny? I don’t think so. I’m not the contemplative type and neither are you.”

“You have your Fantasy and I’ll have mine,” he snapped. “You want physical? Let’s climb mountains. We’ll start with Katahdin in Maine and head west.

“Climbing and hiking is good. I’m not sure I want it to be our only experience, though.”

“We could get a motor home, travel across the country and climb mountains.”

“Now you’re talking. Let’s get a boat and go cruising.” Her eyes gleamed.

“Aha! This was your plan all along.”

“Well … maybe. We like to explore. We like to visit different countries. It really is a no brainer for us, the Ultra retirement adventure.”

“It would certainly be a Cool Change from our traditional life, but we’ve only sailed small boats together and folks just don’t go from Zero to Cruising like that!” snapping his fingers.

“I know that. And I know I’m an in-lander. The closest I got to the sea as a kid was when my mom sang “My Bonnie lies over the ocean.”

“Don’t bring your mother into this. She already thinks I’m a Renegade. She’ll immediately start to worry, Good Golly!” he said, voicing the last in a wavering falsetto, and placing his hand over his heart.

She was unimpressed. “Yes, and you’ll respond with ‘Good Golly Miss Molly and fake a piano sweep with the back of your fingers, making her laugh.”

He gave her a quick kiss. “You know me well.”

She grinned, thinking of his real hot button. “My mom will be OK, but Aunt Esmeralda will hate you.”

“As long as she doesn’t turn me into a frog, I can live with that.”

“I’ll give you Sanctuary from da big bad aunt,” she promised in her best talking to baby voice, earning an aggrieved look in return.

He grunted, thinking about what it would take to find a boat, move aboard and sail away. “Before we get Carried Away, let’s talk about what we’ll need to do.”

She looked at him with Bright Eyes, “I’d rather talk about sailing under a Carolina Moon, going to a sandy beach to Frolic in the surf, changing our Latitudes, setting the spinnaker when we’re Just Driftin’, trimming the main when it’s Breezing Up, putting in a Third Reef when it blows, and—“

“I get that. And your boating terminology is impressive, but this is not going to be a totally smooth Transition, you know. It’s a little early for a Celebration.”

“I get that. I do. We’ll have to find a boat, sell the house, get rid of stuff, and find room on the boat for provisions, my Cuisinart, your martini glasses, and all Essential Parts. We’ll argue, I’ll cry, and we’ll work like dogs. I want to do it.”

He finished his martini, laughed, and got up to grab pen and paper. I’m in. Let’s make a list of what we need to do to put this Bodacious plan together. Hell’s Bells! We’re going cruising!”

As the weeks passed, they talked, made lists, visited marinas and boatyards and gradually made decisions about the next steps: to put the house on the market and to find a boat. One evening he came home and said, “I saw a boat in a yard down the road. It’s just 28ft long, but I think it could work for us.”

She was unimpressed. “You got into the Moonshine, didn’t you? We’re not going to fit in a 28-foot boat, and we’ll never find one that small with a Crow’s Nest.” She grinned, knowing it was out of the question, but planning on using it as a bargaining chip. “I’ve always wanted one.”

“Will you get serious?”

“Fine. Seriously I want a really good galley with two sinks and as much counter space as possible. And I want a decent cockpit so we can host large, Joyfull parties on deck. Also space for the litter box.”

He groaned. You aren’t thinking of bringing that Naughty Cat with us are you? Have you seen that Cat’s Paws? I still think she’s a Puma masquerading as a house cat.

“Hey! Persephone’s a Cool Cat! She’s my baby and she goes. I’ll give up the crow’s nest.”

“You were never going to have a crow’s nest. Let’s move on. Besides, I think we need to talk with a yacht broker.”

“Do you have anyone in mind?” she asked.

“Yeah. Remember when Barbara and her husband launched their boat and we met that broker from Nova Scotia at the party?”

She looked at him blankly. He persisted, “You know the guy. What’s his name? He kept saying “Ay” after nearly every sentence – ‘Nice day, ay?’ – like that.”

“Oh!” Light dawned. “Give me a minute … what was his name … I know¸ lindal-Ay? He laughed. “Yeah, that’s right, Tom Lindal. He seemed to know a lot and Barb had only good things to say about him. I’ll look him up and give him a call, so we can get started on Our Adventure-ay?”

“That’s the Spirit!” she said, “We’ll get our own floating Sea Shanty in paradise.”

He grimaced. “You’re going to have to bone up on Buffett before we go.”

“I’m a cruiser. I am a Free Spirit. I will sing any song I want to and sing it My Way.”

Months later, after choosing a boat, selling the house and getting rid of twenty-five years of stuff, they Finally moved aboard, ready for Chapter Two of their life together. A few days before they set sail to follow their Ocean Star, they again enjoyed cocktails, this time in the spacious cockpit of their new, floating home. “Ahh,” he said, lightly strumming his guitar, “if my granddad were here, he’d say I was living the Life of Riley. You truly had a Magic Inspiration when you suggested we do this.”

“Why, thank you, kind sir. I am your Island Girl, you are my Troubadour. This is Purrfect. Let’s follow the Windward Star on a Caribbean Reach.”

Barb Hart lives aboard La Luna, a 47-foot sailboat, with her husband Stew. They’re filling the cruising kitty in St. Thomas prior to a planned Atlantic crossing in 2014. Barb’s blog is: www.HartsAtSea.com