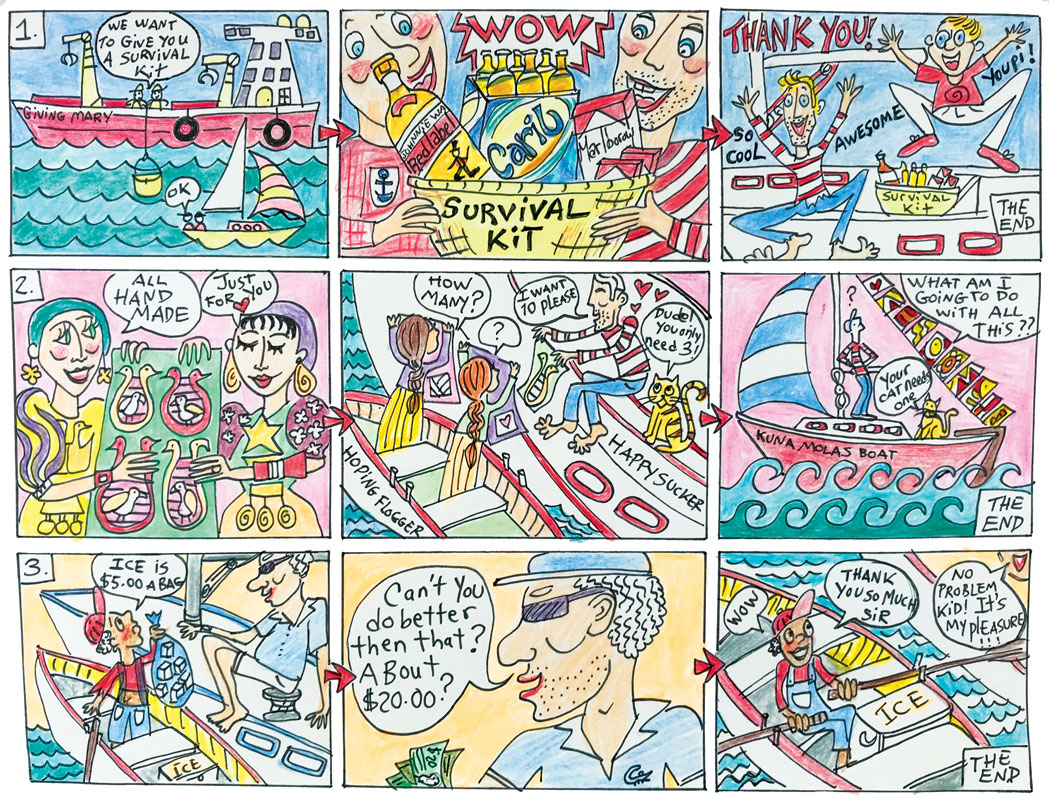 Sailing With Charlie: Happiness is Giving

On the final day of the Bitter End Yacht Club Pro Am Regatta, sailors and spectators were called off the course when bolts of lightning were spotted in Virgin Gorda’s North Sound.

“It is the first time we have had to pull the sailors off the water due to lightning,” said BEYC marketing manager and race official John Glynn

After a short break, the stormy weather cleared and sailors were back on the water to determine who would take the top spots.

The regatta is in its 28th year and features professional sailors and amateurs competing together in a weeklong event.

At the start of the regatta, sailors raced to The Baths from Bitter End.

“This gives everyone time to socialize and have fun,” Glynn said.

For the rest of the week, the sailors competed in fleet racing, while the finals comprised match racing.

Anthony Kotoun, the 2014 US Moth Champion, was the regatta’s overall winner.   When he was not competing in the Pro Am Regatta he gave demonstrations and rides on his moth in North Sound.

“A handful of guests got the ride of their lives,” Glynn said. “And one was allowed to skipper himself.”

The regatta attracted about 100 people, the numbers dictated by the amount of boats and hotel rooms that are available.

“The turnout is pretty good. It is nice to see the resort full this early in the season,” Glynn said.  He added “the regatta jumpstarts the season for the resort.”

Prior to the skippers meeting on the final day Dave Perry, a Sailing World Hall of Famer, was having breakfast only steps away from the beach with his friends and family.  He enjoys the BEYC regatta because he is able to bring his wife along to the event.

“This is nothing like the regattas that we compete at,” Perry said. “We don’t come with our teams. I sail with the guests and you never know who you are going to get — there are people from all around the world. We are intense, but we can’t be too intense.”

Gary and Emily Lemel, of North Carolina, didn’t have the opportunity to sail with Perry, but did race with Messrs. Railey, Anderson and Ms. Roble.

“They are not only good sailors, but super nice people,” Ms. Lemel said. “They have not only been very patient, but very willing to make sure the guests have fun, while still being competitive.”

For Mr. Lemel, it has helped raise his level of confidence when he is on the water sailing.

“When you have the quality of sailor that they have here tell you that you are doing something right or gives you a little tweak to do something better, you come away and think, I can do that back home.  It is a confidence builder,” he said.

The Lemels started sailing ten years ago, when Ms. Lemel’s father introduced them to the sport. They said the BEYC Pro Am regatta has been a great learning experience.

The couple first discovered the BEYC Pro Am regatta by accident while chartering a boat in the BVI. This was their third regatta.