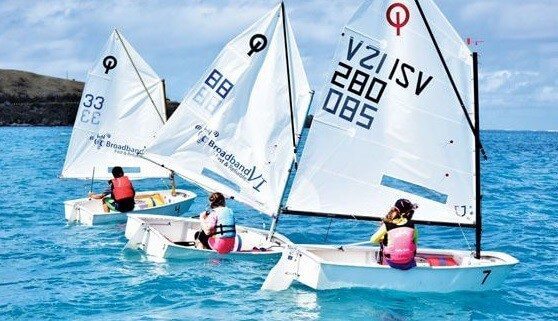 What started as the Bill Chandler Sunfish Memorial Regatta three years ago has now dropped Sunfish from the name in order to welcome competitors in Optimist, Club 420s and Lasers. It’s a move the late Chandler, an avid sailor, long-time marina operator and volunteer instructor to generations of the island’s sailors, would have approved. This is especially so if Chandler could have seen the young talent out on the water at his namesake annual event hosted by the St. Croix Yacht Club in Teague Bay in February.

In the Sunfish, Chandler’s favourite boat, ten-year-old Milo Miller and 12-year-old Carson Oakley teamed up to win against adult, Jeff Dykstra. Dykstra, who is new to sailing, single-handed his own Sunfish. Miller and Oakley’s effort earned the grade-schoolers their names on the events perpetual Sunfish Trophy, which is an old Sunfish rudder.

“It was nice to sail a bigger, faster boat than an Optimist,” says Miller, who added that the secret to he and Oakley’s win was team work.

Oakley agrees. “Once Milo and I figured out which side of the course was favored it was easier, but the competition was still good. The Sunfish class did not have as many boats as we had hoped but I felt that sailing the Sunfish was the right thing to do in order to honor Mr. Chandler.”

“Being the middle child and having four brothers, I always enjoy beating boys no matter what the conditions,” tells Kohl. “My biggest challenge is watching my tell-tales and staying focused on my boat. I tend to lose concentration, and speed, when I get over-focused on other competitors. When I worry about my own boat, I usually do really well.”

It was Kohl’s 14-year-old brother, Atlee, with crew Olivia Hanley, that won the Club 420 Class. After nine races in one day with no throw-outs and boat rotations after each race, Kohl and Hanley bested the class by a slim four points over second place finishers Ethan Hanley, Olivia’s brother, and Lake Sanford as crew.

“I loved the opportunity to compete with my high school friends,” says Atlee Kohl, who represented the USVI at the 2015 Optimist World Championships in Poland and is now sailing Club 420s.

“The light wind conditions gave my crew and I an advantage. I think our success was communication.  Olivia and I discussed strategy during the race and I gave her plenty of warning before a maneuver. It’s fun to sail with a teammate.”

Taylor Hasson was the only Laser 4.7 sailor and regatta organizers hope to have a larger Laser class next year.

“Bill (Chandler) loved the Sunfish, but he taught all classes here at our yacht club from Optis up to 420s for many years. It didn’t matter which boat, if they needed an instructor, Bill taught it,” says regatta director Karen Stanton. “Bill’s family comes down every year to watch this regatta and they are all in favor of keeping the regatta alive and growing. Going forward, since this event takes place about two months before the Crucian Open regatta in April, which is a qualifier for the Opti Worlds, we are going to use Bill’s Regatta as a tune up, so all the sailors can be race ready for the Crucian Open.”