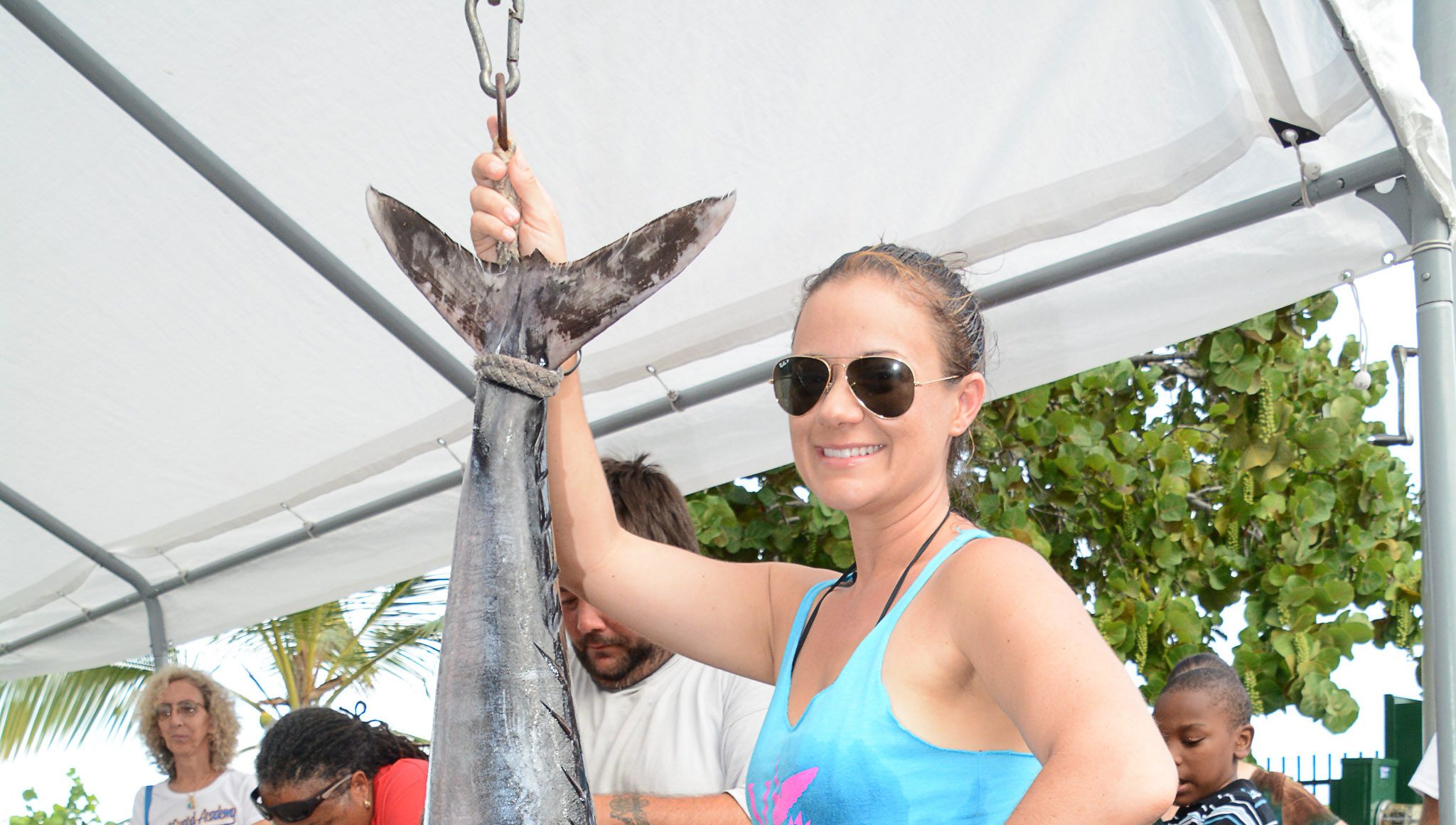 The early bird may get the worm, but it was a whopper wahoo that St. Thomas’ angler Angela Berry reeled in shortly after sun-up on Sunday. The 58-pound fish earned Berry the Top Angler title in the Virgin Islands Game Fishing Club’s (VIGFC) Wahoo Windup, held November 22. Berry’s catch was about 17-pounds short of the 75-plus-pounds needed to pocket the $3000 grand prize. However, her fish contributed massively towards Double Header’s Top Boat trophy with 3 wahoo collectively weighing in at 112-pounds. Berry also won Top Female angler thanks to a combined catch of two wahoo for the day tallying to 84-pounds.

“My first thought when I hooked up was, ‘what a way to start the day’,” says Berry, who was awarded Top Female Angler in the 2011 Wahoo Windup with a 33-pound catch and a prize for fourth largest wahoo, a 33.88-pounder, in the 2014 tournament.

The Double Header team headed south towards Vieques and put their lure rigged lines into the water at 6:30 a.m. Seventeen minutes later, Berry hooked up her big fish.

“We knew what it was (i.e. a wahoo), but not who (i.e. the winning fish) it was,” tells Berry’s husband Chris, one of six anglers and crew aboard Double Header. “It took her a solid 10-minute fight to get that big wahoo in the boat.”

The team continued to work the undersea edge looking for wahoo as they cruised south of St. Thomas. They missed one around Noon, then Berry hooked up again around 2:30 p.m. when she successfully reeled in a 26-pounder. Thirty minutes later, Capt. Tyler Maltby, made it a trio of fish for Double Header by catching a 28-pound wahoo.

“This is the largest wahoo I’ve ever caught in my life,” says Berry. “Each year, the wahoo I catch in this tournament is a little bigger than the year before. Hopefully next year I’ll catch one over 75-pounds for the big prize.”

Sixteen wahoo collectively weighing 414-pounds were caught by the 13 boat fleet with 61 anglers.

Cash and prizes were presented at an Awards Dinner at the VIGFC, in Red Hook, held Monday night.

“The weather forecast called for some sporty seas, but I think most of the fishermen were surprised that it was pretty nice out there. In the end, everyone stayed safe, everyone had fun and we enjoyed another successful Wahoo Windup,” says Lori Bailey, manager of the VIGFC.

The VIGFC appreciates the contributions of Glazer’s Premier Distributors, LLC and IGY American Yacht Harbor for their support of the 2015 Wahoo Windup.