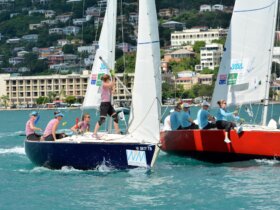 Translated from ancient language, Bequia means ‘Island of Clouds’ and now those clouds are beginning to rumble, and it’s not an approaching hurricane. Youth sailing, like lightning bolts, has struck this gentle island located at the northern tip of The Grenadines.

A year into launching Bequia Youth Sailors (BYS), with support from Bequia Rotary and Bequia Sailing Association, Andy Mitchell and co-coach Christian Schrijver have ambitious plans. With a fleet of Optimists and two locally produced 18ft wooden racing boats called double-enders, more children are being introduced to sailing and, within recent months, to ISAF-ruled racing.

In August a select team, travelling to Carriacou for their first off-island regatta, took five of the top six spots in a fleet of thirteen Optimists. The team was up against competitors from islands such as Petite Martinique and Grenada.

A first for Carriacou Regatta was a five person Race Committee for Junior Races (Optimists, Mosquitos and Lasers) headed by Soling Olympian Ronnie Ramos. They put on three windward/leeward races.

There are numerous strong young sailors in Bequia. Of those that travelled to Carriacou, Shain Farrell (14) and Oreakay Joseph (11) stood out.

Still learning the ropes of conventional starts, Oreakay and Shain were both over the line early in the second race. There was frustration for Oreakay when, after sailing back and dipping his bow into the starting line, the race committee hailed, “You’re not clear. You have not restarted. Your entire boat must come behind the line.”

Following his successful restart, Oreakay was the first of the thirteen Optimists to reach the windward mark. But more trouble was in store. Just before rounding the mark, a spectator powerboat clipped his rudder. Temporarily disabled, he fought his way back to fourth place, making it the only race he did not win. Completing the regatta with six points each, Oreakay’s two first place finishes edged Shain Farrell out of the top spot.
From a heritage of beach starts and cries of “Helm Dung,” the youngsters are now hungrily devouring ISAF’s Racing Rules of Sailing.

Port/starboard and other rules are not recognized in local boat racing throughout much of the Windward Islands. When two boats approach each other on a collision course, one skipper may hail: “Helm Dung!” (Down in Creole is pronounced ‘dung’.) On hearing the call, the rule goes that the other boat must immediately tack away. Upon the opponent’s tack, the hailing vessel also immediately tacks.

Historically, boys have crewed aboard their father’s workboats until coming of age to take the helm themselves. But now Bequia—like Carriacou and Grenada—is in transition and preparing their children to race outside of The Grenadines in Olympic one design boats utilizing ISAF rules.

With support from Schrijver and others, BYS is taking off. Bequia’s own Annual Easter Regatta offers informal Optimist races. And BYS is hungry to obtain high level coaching and refine their skills in regional regattas.

To be at anchor in Admiralty Bay these days is to witness girls and boys sailing a half dozen Optimists or match racing in the 18ft double-enders More Worries and Worried Again.

Mitchell is having success in utilizing both the traditional open wooden double-enders, while drawing from his own yacht racing background in the U.S. to coach the children in modern one design boats.

“I may not have been at the helm, but the yachts I raced came first or second across every finish line in the top U.S. east coast regattas,” says Mitchell. “I know what it means to strive for perfection.”

Standing on the beach with Shain and Oreakay, they explained, “Andy is very clear with all of us. No one can enter a boat without wearing a proper lifejacket. He has set rules that we must follow or we don’t sail.”

According to Mitchell, BYS serves around 200 children during the year.

In October, instructors from Trinidad conducted a boat safety certification course for BYS. And there are plans to send the young Bequia sailors to compete in St. Lucia’s Mango Bowl; and to Puerto Rico for Club Nautico de San Juan’s 2013 International Regatta.

With good sportsmanship, determination and organizational support, BYS is blasting onto the scene. There is fire on the Island of Clouds, be listening for the thunder and watching for the next lightening strike!

You can support BYS by donating boat parts and/or money. In return, get free Internet at Handy Andy’s on the waterfront road in Port Elizabeth. Visit: http://www.bequiayouthsailors.org/

Ellen and her partner Jim Hutchins have lived aboard their Sun Odyssey 40 Boldly Go for three yeas in the Caribbean. The cruising couple featured in a recent program broadcast on The Biography Channel. For more details, visit: www.boldlygo.us